Next Monday marks the 40th anniversary of our beloved show, and, as some of us head to Dallas to celebrate, others will be throwing their own private celebrations from the comfort of their sofas, or from behind the shower curtain, perhaps surprising a family member who thought you were dead, getting shot with a nerf gun or drinking yourself into oblivion from the liquor in the cabinet, all the while watching our favourite tv family do it on screen for real.

However you plan to celebrate, tell us about it here

Now is also the ideal time to talk about your memories of Dallas and your experiences which could be anything from meeting the cast, visiting the Ranch or your own private thoughts as you watched the drama unfold on tv.

I don't know about you, but growing up I always knew Dallas was special and I've been proven right by the fact that we're still here talking about it so many years later.

My own memories are vast, my experiences amazing - and I have to say that many of them wouldn't have happened without this site, especially the kindness of people like Colin and many of the wonderful friends I've met here, who have not only supported me through really difficult periods of health and personal difficulty, but who continue to be there, even if we haven't seen each other in a long time.

Dallas as a show is one thing, but the power that I've found it has to bring people together is incredible. I don't know where I'll be in another 40 years time, but I'm so honoured that this show and the people who made it, have been part of my life for this long. I never could have dreamed as a child watching them on tv that I would actually get to spend time with Linda Gray and Larry Hagman - two people who in my heart who will never be replaced, no matter how much time passes.

So here's to you Dallas, as I tear up, Happy 40th birthday, my dear, dear friend. 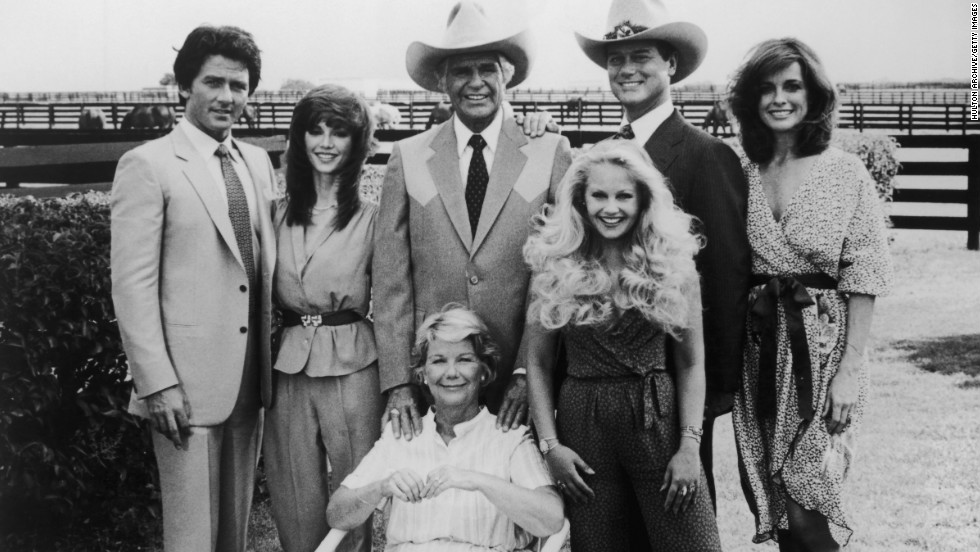 Well said Sarah. I'll add my 2 cents worth at a later time but on this note I'm signing off now until after Easter. Some on here will know I've organized an 80's themed reunion party. It just so happens to coincide with the 40th Anniversary of Dallas.

So to everyone here, whether your sitting at home alone watching some classic Dallas or those lucky enough to attend the official celebrations in Dallas;

Sarah said:
I’m at the airport now in Dublin and Karin has already arrived in Dallas
Click to expand...

@Sarah, are you ready in case they reveal that there is a special surprise guest star called...Deborah Shelton? What would you tell her, in public and private...?

I am looking forward to the fan event this weekend! In January, I started rewatching Dallas from the beginning with the goal of rewatching every episode and movie before the end of the year. Last weekend I spent several hours exploring and photographing actual filming locations in downtown Dallas that were used on the show. I took almost 500 pictures. I am enjoying revising these Dallas memories during this anniversary year!

HB of 40 years to the ‘Big Daddy’ of the 80’s super shows. Enjoy the celebrations in DALLAS; over the weekend, to those lucky enough to be there.

Jock: “Yeah a little touch, of Bourbon. I’m glad I caught you alone. I got something I want to talk to you about.”

Jock: “I think I have been spending too much time at the office.”

Bobby: “Well if you have I can understand why.”

Jock: “Well I just can’t let JR to continue to run the business the way he has. He just doesn’t know, when to stop!”

Jock: “I know but that’s the point. Your mama means more to me, than Ewing Oil. I should be spending more time with her, especially right now!”

Bobby: “I think she understands that. Almost loosing this ranch was a real blow to her, that’s all.”

Jock: “Well that’s just another reason why I should be with her. But I can’t do without you Bobby! I’m asking you to come back, to Ewing Oil.”

Bobby: “Come on Daddy, I’m running the ranch now. I like that! I can’t go back to work, with JR, especially if I have to look over his shoulder, all the time.”

Jock: “I don’t give a damn about JR wants! I want what’s best, for this family.”

Jock: “Bobby I never told you how to live your life. I’m not telling you now. I’m just saying I need your help, that’s all.”

Jock: “Look its not going to be forever. Just until we can get JR on the right track, that’s all. Think about it!”

Thanks I'm sure we will.

Will write more in this thread when I get home. But yeah Happy Birthday Dallas!
long live our favorite show.

Happy 40th Birthday to the best TV drama on earth.

I'm only after wishing the show a Happy Anniversary in a different thread!

I shall be watching selected episodes of the original show, the Return To Southfork retrospective & rounding off the evening with one of the TV movies.

Wow does this make me feel old! When I watched the first episode of Dallas I was still in high school, would turn 18 in about a month and graduate in about 2 months. Back then I thought my 40th birthday was a million years away. Now I blew right past that and it's been 40 years since that first episode of Dallas. I guess I'll celebrate it by watching that first episode and reflecting on everything that has happened since then and the fact that instead of 18, I'll be turning 58 in about a month. 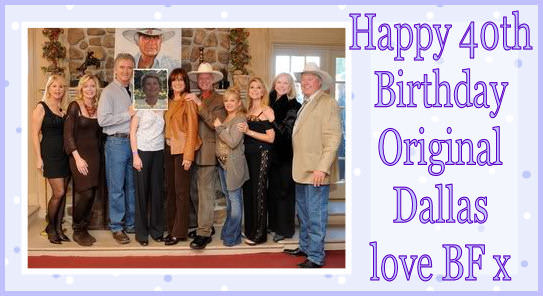 Happy Birthday to Original Dallas
the best show ever made that made an addict and I met some lovely cast members and forum members through it
I never thought as a school girl that I would still be collecting Dallas and memorabilia 40 years later
Dallas was an ensemble show for me and one little blonde lady called BBG touched my heart a very long time ago along with Victoria and Patrick
The years of mini to s6, s8 dream and 9 will always be the best as it featured original cast and members.
S7 with Dreary Robot reed was hard to stomach but luckily they realised what a mistake this was, and she featured less and less and it did give us Swan Song
Dallas was special, but it came to dominate my life, what I did and where i went, what I didnt do, and I dont think that that is a good thing with hindsight

After that when people started to leave, the show suffered and dont get me started on the travesty that was CC and TNT Dallas which i disliked intensely and didnt recognise it as Dallas. I hate the way it has tainted my Dallas memory and re wrote Dallas history.
Sadly it even made me go off a cast member i used to adore! but hey ho!

So glad to have met so many nice people along the way and cast members but a huge regret is I never met BBG.
When I was lucky enough to get on the Dallas set, she was off sick following her heart attack and i will always regret that, so near and yet so far!

From a Tuesday evening in 1978 watching Dallas and Diggers daughter when doing my Maths homework at the same time to today, 40 years older and not necessarily wiser, I will watch my fav episodes (at FWD and cutting out EO scenes) over the next few days and they will include
Mastectomy part 1 and 2 - (which turned me from a fan into Dallas addict and i became a BBG devotee, she would be my specialist subject on Mastermind)
Bypass
Home Again
Julies return
The Search
Acceptance
The reckoning
eye of the beholder
the family ewing
Brother can you spare a child

Happy 40th Birthday Dallas, will seem strange not to have the TOP man around to celebrate it, he was larger than life, a huge personality and Larry Hagman created an TV icon in his role as JR - the man you loved to hate. He would have loved to have been around to party and celebrate

When I think of Dallas, i think of this photo first and foremost 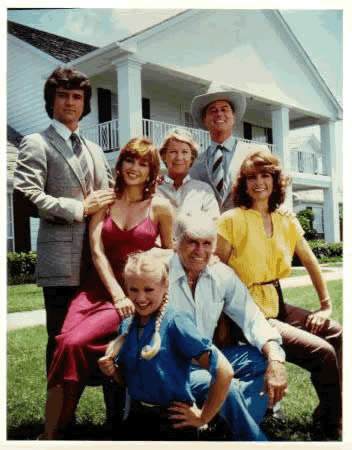 on your 40th anniversary

Tomorrow is the second day of Easter , so unfortunately I can not see anything from Dallas on tv, because i'm away with the family, so I have just seen the reunion "Return To Southfork" tonight to celebate the 40th anniversary of Dallas.

I was actually planning to re-watch Dallas all over again, but unfortunately I have too many series to see on DVD and TV now, so I'll save Dallas for later this year.

Furthermore, I wish all people who go to Southfork for the 40th anniversary, have a lots of fun.

My sister and I in 1992 at Southfork Ranch.
Congratulations DALLAS on your 40th anniversary, always a witness in the commemorative dates of every good or bad event of my life !

What an amazing weekend. As some of you know I held a party to pay tribute to THE greatest television show in history. It was also an opportunity to catch up with long lost friends. The weather was perfect (a bit too warm) and everyone had the most amazing time. It all kicked off with a tribute to the Ewing Bar-b-que, complete with mechanical bull. What a belly laugh. May have been a little on the expensive side to hire but well worth it. FYI. It's not as easy as you think it is and try this well before consuming alcohol. With plentiful food and Dallas episodes playing on the big screen in the background everyone was having a great time. Then came the evening where the gentlemen changed into tuxedos and the ladies into their evening gowns to pay homage to the Oil Baron's Ball. No food fights...thankfully.

I'm still receiving text messages from friends and family to say what a great night they had. Well worth the expense. Someone has already suggested another event in 10 years. No way! If I'm still kicking I'll be on my way to Dallas to check out Southfork personally. It's on my bucket list.

I've been searching NEWS on anything celebrating the 40th Anniversary. I think the following article best sums up my feelings for Dallas. Probably one of the best articles I've seen in a long while.

I didn't actually do what I said I would upthread.

I put on DVD season eight & found it so addictive that I watched it all over Easter & into the anniversary date. I'm now on to season nine, the infamous dream season, so I'm going to watch that to the finish.

I did toast all the cast & crew with special mentions to the late Jim Davis, Barbara Bel Geddes, Larry Hagman & Howard Keel.

Tonight though, I am definitely going to watch Return To Southfork.