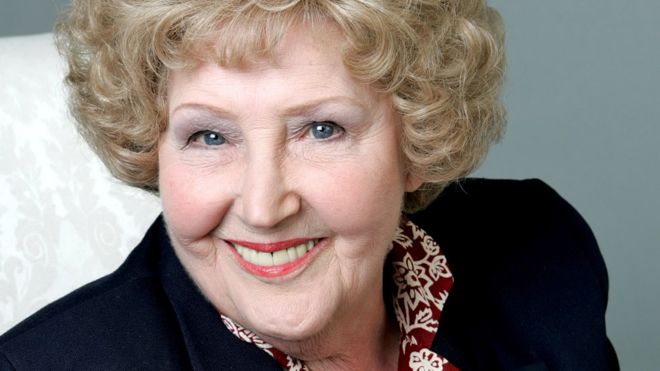 Image copyright ITV/Shutterstock
Image caption Tilbrook played Betty, one of the soap's most popular characters
Emmerdale actress Paula Tilbrook, who played Betty Eagleton in the soap for 21 years, has died at the age of 89.

Tilbrook joined the soap as the gossip Betty in 1994 and left in 2015, returning for a brief cameo in the Christmas episode that year.

"The family of Paula Tilbrook are sad to confirm the peaceful passing of their beloved Paula," a statement said.

"She died of natural causes a few months ago at home with her loved ones beside her."

Tilbrook died in December, but the news was only made public on The Stage website on Wednesday.


Betty was one of the ITV soap's most popular characters with fans, who revelled in her gossiping, sherry drinking and on-screen relationship with Seth, played by Stan Richards from 1978 until 2004.

Her last scenes saw her revealing to her fellow Yorkshire villagers her plans to move to Australia.

As well as starring in Emmerdale, Tilbrook also appeared in Coronation Street, where she played four different characters, three of whom appeared within a decade of one another in the 1970s.

She was wonderful. The current rerun of classic episodes on ITV3 show just how easily she slotted into the show, within a few episodes it was like she had always been there. An effortlessly brilliant comic actress, the writers obviously took great joy in writing for her. It was always a joy to watch her.
A

Betty in many ways somewhat replaced Annie as the beloved village stalwart, it did feel that she had always been there.

such a shame, we need more Betty’s and less Kerry’s in Emmerdale right now

I missed this news and somehow it feels more shocking. I'm not a big watcher of Emmerdale, but from what I have seen over the years, Paula was a great asset to the soap, I always loved her scenes.

Member Since
Adam was a lad.