New discography to explore: Adam Faith
According to wiki he was one of the most charted acts of the sixties. Wow, he must have done something very right - and yet we never talk about him.
He was also quite handsome in those days. 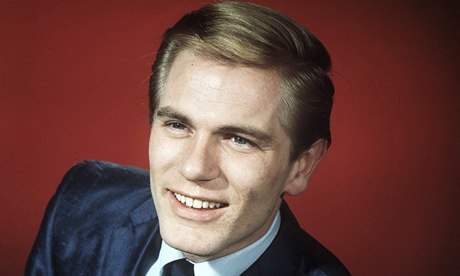 And then some time later he looked like the British answer to Patrick Juvet / the blond answer to Oliver Tobias.

Top 40 hitdossier doesn't mention him at all, so...what was going on?

Lots and lots of generic romantic popcorn songs, but don't worry - there is a greatest hits of this obscure megastar.

1. Cowman Milk Your Cow
The Bee Gees wrote it for him.

3. Don't You Dig This Kind Of Beat
All songs on his "On The Move..." album by hit songwriter Chris Andrews

4. I Don't Need That Kind Of Lovin'
Also recorded by Sandie Shaw

5. Come On Dream
6. Johnny Comes Marching Home
7. It's Alright
8. Little Bit Of Love
9. Knocking On Wood
10. Something Beginning With You

1. I Don't Wanna Die In An Air Disaster
While I was listening to all his songs (I skipped the Spanish albums) it occured to me that many of his songs are too folksy to be great pop, but at the same time too poppy to be great folk music. There's no "Sound Of Silence" here.
And it's not like every song has to be significant or metaphorically refer to social-cultural issues or being super-clever in any other way or perfectly capture some mood or whatever, but when it comes to language there's a lot to play with - and I don't always get that from his songs. Sometimes I found it too literal and straightforward, almost as if it was written by a non-native English person.
It's possible that I'm being particularly harsh this time because the music itself sounds great.

Anyway, IDWDIAAD, also released as "Air Disaster" (and I had expected the Dutch single to use brackets: "(I Don't Wanna Die In An) Air Disaster", but no, not this time) sounds fabulously weird and original, including special sound effects and lovely aah-aaah backing vocals, powered with "Oh Lord" lyrics.

2. Follow The Bouncing Ball
This duet with Steve Rowland appears to be Hammond's first single, before he had released any albums.
This is what I call a perfect pop song, I'm not sure exactly what it's all about but it sounds like it doesn't matter. Just follow the bouncing ball.

3. It Never Rains In Southern California
A popular tune for the 1970s compilation CDs that tackles the subject of the golden dreams/shattered dreams of the American entertainment industry, the same way it was done/will be done in hundreds of other wicked California songs. Movie Star, Send The Man Over (Cher), Hollywood Seven (Jon English) etc.
But this song does the remarkable job of delivering exactly what it says in the title, because - no matter where you are - you can almost feel the sunshine on your skin.

4. The Air That I Breathe
Not surprisingly, there's a little disagreement between Hammond and Hollies fans regarding the who-did-it-best. And now *I* have to play the judge and make it official.
Luckily I'm in an Albert Hammond Top Ten because I'm going to say that Hammond's original is vastly superior to the Hollies cover. That said, I do like the semi-psychedelic sound of the cover version and it's just great that both versions exist.
Hammond's original version goes from timid balladry to hand-clap chorus, followed by haunting guitars, and that also makes it a more diverse experience.

5. I'm A Camera
A pretty generic song (unless you hear a photographer-stalker-rapist story in it) but it's oh-so-very catchy. It also reminds me of another very eighties song, maybe Ultravox or a band like that.

6. Names, Tags, Numbers & Labels
My third pick from his first album. No single release outside the US but I think it could have done well in Europe.

...and the rest of the nice songs

He did his first three albums with co-songwriter Michael Hazlewood, and many songwriters have tried the odd song for themselves. He was also a member of Family Dogg, together with Albert Hammond and Steve Rowland, but this is his only solo recording (I think).

It's on Mad About The Boy vol. 5 (Klone Records)

Should be a fun one.

I don't know where in my list it will be, but I have to include Summer Moved On this time. On the basis of that note:

Mel O'Drama said:
but I have to include Summer Moved On this time
Click to expand...

Have we already done the a-ha top 10?

Willie Oleson said:
Have we already done the a-ha top 10?
Click to expand...

Hmmm. I was thinking we must have done at some point, but perhaps I'm thinking of the nominations.

If We Can’t Live Together, ​

Oh - and this is a very nice alternative:
I love the strings, and Morten's vocal is a little less "hidden". I might grow to love it more than the '85 version with some more plays, but the '85 version just sounds so right.

1. Lifelines
Perhaps not the song with the most quintessential a-ha sound, in fact, it could have been any indie rock/pop band from the late 90s/early 2000s.
Regardless, it's a beautiful song, with some strategic-dramatic piano & strings in the background and I'm ALL for it.

2. The Sun Always Shines On TV

3. You Wanted More
If you'd change the lyrics here and there I think it could be a better Bond song than Daylights.

4. The Wake
It sounds very winter-y, maybe they could do a Christmas remix?

5. You're So White
A funny title, but I had not expected it to sound funny. Unreleased, apparently (and suprisingly).

and the rest of the best...

6. The Living Daylights
7. Riding The Crest
8. The Blood That Moves The Body
9. Did Anyone Approach You
10. Take On Me

New discography to explore: Alphaville
Another 1980s synth-pop band, this time from Germany.

Their first album is a great example of baroque synth-pop and since FOREVER YOUNG sounds like one of those 1980s signature songs I assumed it was an international smash hit i.e. a top 5 hit in every country. But that's not what happened, it wasn't even a top 10 in Holland. Very bizarre!

I found it impossible to rank my top 3 so I did them in alphavillebetical order.

1. Big In Japan
Silhouettes of strange illuminated mannequins could have been taken from an Amanda Lear song. I'm sold!

2. Forever Young
3. Sounds Like A Melody
4. Romeos
5. Summer In Berlin

6. Heartbreak City
This could be the Big In Japan for the 21st century.

7. Apollo
Funny, it sounds as if they've put all the Alphaville/Spandau Ballet/Duran Duran/Simply Minds songs in a shaker and made an Apollo cocktail.

8. Wonderboy
It's definitely the best Wonderboy song I've ever heard.

9. Marionettes With Halos
10. Dance With Me

Saddle up your horse with no name and meet me in the middle of Ventura Highway!

Hold your horses, everybody. The Top Ten has the responsibility to be on top of everything and unfortunately this means that America will be postponed.

Instead, we'll going to (re)discover the very best of Des O'Connor.

We're still not going to explore AMERICA because another showbizz death prompts me to do Guys n' Dolls first.

No, wait. Stop. I don't like the macabre tone of these death top tens.
I'll stick to my alphabetical list and that means we're going to do AMERICA after all.