Watching James Hazeldine in One Summer earlier this week gave me a yen to revisit the Chocky trilogy, which I've begun by watching the first four episodes of the original series. 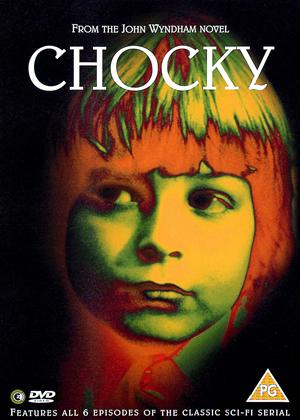 This was a series that really captured my imagination when it first aired in 1984 (it used to be on at 4:45 on a Monday, wrapping up Children's ITV for the day. Probably right before Blockbusters).

What's really grabbing me this time round is the grown up air. It isn't treated like a children's series but played for complete truth. It's a rare young person's TV show that will devote exclusive screen time to adult characters having adult conversations, but there have been a number here. We've even managed to learn where Matthew's parents studied. One scene towards the end of episode three (or was it two?) had Hazeldine, Carol Drinkwater and Jeremy Bulloch having an intense, increasingly heated discussion about their son which felt very Play For Today-ish. Having these excellent actors discussing the possibility that their son isn't, in fact, having a mental health problem, but is genuinely in touch with a sentient being from another world lends credence to the entire premise. I like that they're not afraid to go dark. The way Bulloch delivers the line about their ancestors calling it "possession" is quite chilling.

Drinkwater as is quite fascinating, hers being an almost contradictory character. On the one hand communicating well - the first to notice her son's changing behaviour and discuss it with her husband. But on the other she's the most uncomfortable at dealing with it, quick to anger and craving denial.

Hazeldine is the most level character here, the one who listens to his son's extraordinary statements with something approaching belief - or at least a willingness to accept that his son believes it. In some ways, he's the stuff of fantasy - the parent who buys into the son's fantasy - but Hazeldine's conviction and the background we're given to the characters (remember that this is a character who has grown used to including his younger daughter's imaginary friend in the family) make it all work. He's quite a different character to One Summer's Kidder. A bit safer and more comfortable. But there's a spark to him, something that makes me question what he's thinking. And that keeps him from getting into bland TV Dad territory.

While some of the young actors aren't quite so convincing at all times, they work well enough. Andrew Ellams as Matthew has the lion's share of screen time and holds the attention well. Zoe Hart is proving to be quite fun as his little sister, always happy to tell tales and get her big brother into trouble. There's a reality to the family unit, and that goes a long way.

Much was made of the family purchasing a new Citroën DX estate. I'd completely forgotten about this angle, which is curious because I was fascinated by cars at the time so this would have grabbed my attention. The choice of car is a fun one, with the DX looking quite futuristic and slightly alien both inside and out. The other car shown has been a Ford Sierra estate. Once again, the Sierra would at the time have been considered the look of the future with its aerodynamic roundedness. I'm sure both were very conscious choices, placed there to make certain suggestions.

Sarah said:
do you remember this
Click to expand...

Nope. But now I want to watch it. It would have creeped me right out when I was young and anything that taps into that feeling has to be a good thing.

Mel O'Drama said:
Nope. But now I want to watch it. It would have creeped me right out when I was young and anything that taps into that feeling has to be a good thing.
Click to expand...

Having reached the end of Chocky and whizzed through Chocky's Children, I'm now coming to the end of the final series, Chocky's Challenge.

Notably, rather than the "by John Wyndham" subtext in the first series, the second and third series is "based on characters created by John Wyndham". Which means that TV scriptwiters are now in charge. While they do capture the tone of the original series fairly well at times, the tweaks that are made are to the detriment of the franchise. For one thing, there's less time devoted to the adults. Increasingly as the series has gone on, they are their role is to interact with the kids. The kids themselves have become something of a team of mini superheroes, with the adults there to support them and Chocky at their beck and call.

One of the best things about the original series was the mystery of Chocky herself. Did she exist? And even if she did, why should anyone believe it? Now she appears several times an episode revealing herself to anyone who is interested, even if they are doubtful, sceptical or downright dangerous. As an example of this, in the penultimate episode of the final series, one of the villains of the piece despatched one of the meddling kids and then called for Chocky who then duly appears just in time to get captured. Compare this with the first series where Chocky only manifested at the end and disappeared when there was a risk of her existence being discovered.

The whole point of the original ending is that the lesson was learnt: Chocky wouldn't reveal herself to anyone - even those she chose to help her. This played out well at the start of the second series where it was Matthew who realised that Albertine was one of Chocky's chosen children and not even Albertine herself knew. But in the third series she's pretty much just hanging out with all the kids and anyone else who wanders in .

Long story short, the latter series are lacking in subtlety and mystery.

The rotation of the main cast is interesting. James Hazeldine and Carol Drinkwater appeared in the first episode of Chocky's Children when Matthew went to stay with his cool bohemian aunt. The two were then were written out until Hazeldine returned at the very end, with Matthew, Albertine and Albertine's father becoming the leads.

The final series has built on this theme. Matthew and his dad appeared in the first episode of two, but it's Albertine and her dad who have become the leads, with a supporting cast of various kids to cheer and adults to boo. It's still enjoyable, but not as rich, engaging and stimulating as the original.

All the same, I'm glad I've rewatched and I'm looking forward to diving into the final episode.