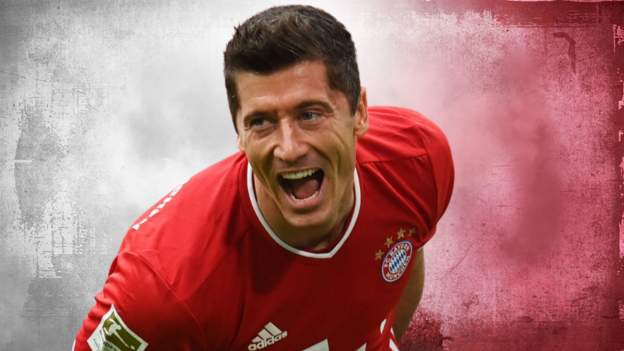 The Poland striker scored 55 goals in just 47 games last season as he helped German giants Bayern to a treble.
Lewandowski, 32, finished as the top scorer in the league, cup and Champions League.

The winners were decided by nominations from national team captains and head coaches, an online ballot of fans and 200 media representatives.

This is the first time Lewandowski has won the award, with Barcelona forward Messi or Juventus' Ronaldo usually triumphing.

This season, Lewandowski has picked up from where left off with 16 goals in 14 games for Bayern.

"If you win such an award and share that title with Messi and Ronaldo, that is unbelievable and it means so much to me," Lewandowski said.

"A long time ago, I remember I was longing for something like this and now I can win such and award. This really means, regardless of where you come form, all that matters is what you put into it."

Liverpool boss Jurgen Klopp was recognised for leading Liverpool to their first Premier League title by being named the best men's coach for the second successive year.

The German won the award in 2019 after lifting the Champions League with Liverpool and beat Bayern Munich Hansi Flick and Leeds boss Marcelo Bielsa to the top honour this year.

"I have so many people to thank and most of all my coaches. If I had known we'd won it my coaches would be here with me. What we did in the last year is all about these boys.

"We didn't dream 30 years but we dream already for a few years. It was absolutely exceptional and we all had a special year in an unfortunately not so positive way but for Liverpool fans at least we could make some highlights in a tricky period. I had no idea how it would feel and it felt absolutely overwhelming."

The Germany international conceded just 31 goals in 33 games for Bayern in the Bundesliga and made a number of crucial saves in the Champions League knockout stages to help his side get to the final.

The South Korea international ran from one box to the other, cutting through the Clarets defence before finishing.

"It was so nice," said Son. "When I got the ball, I tried to pass, received it in my own box, couldn't find any option and started to dribble, and after two seconds was in front of the goal - it was such a surprise, such a beautiful goal."

The Reds' summer signing from Bayern Munich, Thiago Alcantara, was also named in the team along with Manchester City's Kevin De Bruyne.

Best men's player winner Lewandowski was joined by Messi and Ronaldo in attack. 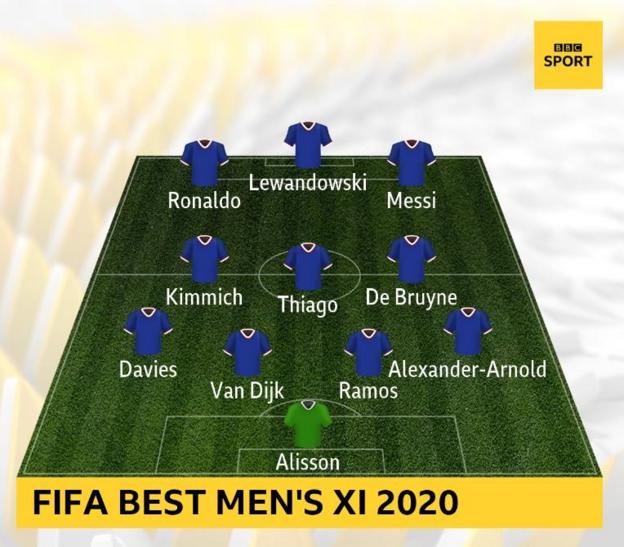 Manchester United striker Marcus Rashford was recognised at the ceremony with a Fifa Foundation award for his work trying to end child poverty in the UK.

Rashford said: "I'd like to say thank you because I know people from other countries want to get involved and learn about it. It will have a knock on effect and things will start to happen in other countries too.

"It is brilliant, it is why I started it because I wanted to make change and give people a better chance at life."