Only knew her from MTM. Another costar Betty White outlived.......

She was also in EVERYBODY LOVES RAYMOND. I was surprised to see she was so comparatively young.

But the MTM cast has lasted a long time --- Betty White is 97, Cloris Leachman is in her nineties, Ed Asner will be 90 this year despite his ongoing weight issues, Valerie Harper is 80 this year and has bounced back from fatal brain cancer, Gavin MacLeod is still sailing around.

The survivors are now so old that they could all kick off in the same year potentially, in a Maryassacre. 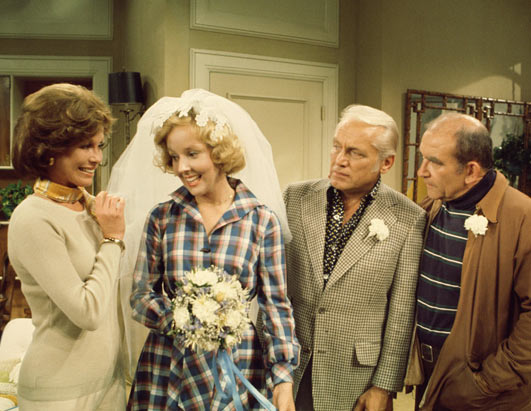 On Everybody Loves Raymond, she played the mother of Amy, the woman who married Robert. She got to play a cathartic (for the viewers, anyway) scene where her character totally dressed down Ray and Robert's overbearing, unbearable mother, Marie at Robert and Amy's wedding. Marie was making the whole event about her, as she usually did. Amy's mom had that Georgia Engel sweetness and soft-speaking manner about her, so when she called Marie out in front of everyone for being so selfish and horrible (upstaging the bride on her Big Day), it wasn't "angry" or "accusatory" at all--and yet she put the old bat in her place better than I think anybody in the entire series managed to do. She said what everybody in America wanted someone to say to her over the years, and said it so sweetly and with a surprising amount of class that even manipulative Marie couldn't turn it around on her. It was awesome!!

She was part of some religion where they refused to go to the doctor for anything, so maybe she died of the sniffles or something.....

I saw her on Raymond and also on the short-lived Betty White Show but she'll always be Georgette to me.