So sorry to read this, one of the most creative and talented guys out
I loved Murder one and NYPD Blue - great storytelling, acting, innovative and dynamic
RIP Steven Bochco, but what a legacy he has left behind

US television producer and writer Steven Bochco, who created some of America's best known police drama series, has died aged 74.

Bochco had been battling a rare form of leukaemia for several years.

The writer was nominated for 30 Emmy awards and won 10 of them. The seven series of cop show Hill Street Blues won a further 26.

The son of a painter and violin virtuoso, he grew up in Manhattan. After studying at New York University and the Carnegie Institute of Technology, he went to work for Universal Pictures as a writer and story editor on the detective series Ironside and Columbo.

From 2014 until 2016, he wrote and produced Murder in the First, a US police drama starring Taye Diggs and Kathleen Robertson.

As news of Bochco's death emerged, actors and industry insiders paid tribute to a man who changed their art-form forever.

Actress Debra Messing, who starred in the US sitcom Will & Grace, called him "a pioneer, a gentleman".

Joss Whedon, creator of the cult TV series Buffy the Vampire Slayer, cited him as a major personal influence. 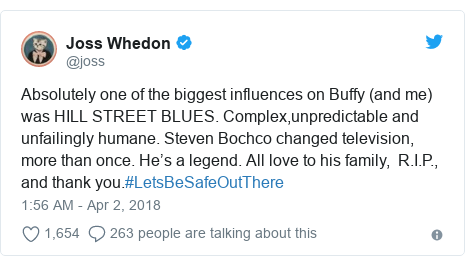 Former USA Today TV critic Robert Bianco summed up: "If this is the Golden Age of television, Steven Bochco launched it and helped sustain it. Every great modern drama owes 'Hill Street' a debt."

I only just realised that Dallas Store employees Leanne Rees and Liz Craig both went on to star in Hill Street Blues. I mean, I knew it - I just never thought about it. 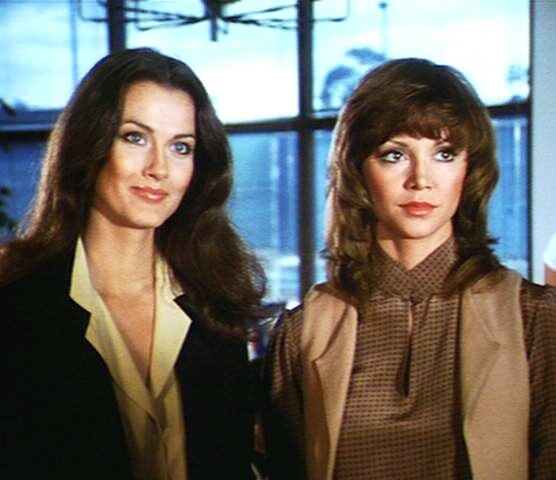 Im really gutted about Steven Bochco, I have re watched the last 6 seasons of NYPD Blue in the Corrie slot since Im giving it a break and listened to all his interviews i posted earlier this year!

I have a question @James from London
I have never seen Hill Street Blues, back in the 80s my parents didnt get any TV reception for C4 progs for a long time!

is it worth watching??

I watched the first season when it came out on DVD and didn't think it had dated very well.
“All art is unstable. Its meaning is not necessarily that implied by the author. There is no authoritative voice. There are only multiple readings.” - David Bowie

OK Thanks, I might give it a go/ just to see - i loved NYPD Blue and Murder One
I always thought Liz at the Store had a rather annoying voice!

From Face Book and Jimmy Smits

Jimmy Smits on the passing of Steven Bochco

When I heard about his death, I was thinking about what a blessing it was have connected with him artistically and have him as a mentor. There are so many blessings that I have in my life because of him. “Get over yourself,” he’d tell me. “Don’t be a putz, Smits!” He wanted me to go see dailies, not to do the whole theater thing. He’d tell me to go in there — and learn.

I met him when I came out to L.A. after a not-so-great audition in New York with some NBC network executives to have another go at it, and I got an audition with Steven. I just remember walking into his office to find this happy-go-lucky guy. His office will filled with all of this sports memorabilia, and he was swinging a baseball bat when I walked in.

He was able to put people at ease and bring out the best in them.Beyond the millions of people that his work has touched, there are thousands of people in the industry that he was a mentor to. It wasn’t just about being transactional; he really offered creative advice to people. He was understanding but he was able to kick people in the pants when they needed it.

He really set the tone for what an ensemble show could be, what a cop show could be, what a legal show could be. I have often thought that what he did with “Blue” was way beyond — if you look at streaming and cable, he did that on network television. If someone tried to pitch a show like that right now, it wouldn’t get on the air. But he was able to push the envelope to let all these other things exist — to know there was an appetite for that, that you could deal with adult themes in that particular hour. He broadened the horizons of television in so many ways. It wasn’t easy, because the networks, they were going kicking and screaming.

I went to his office early on in the run of “L.A. Law,” and he showed me the video of the Steven Bochco logo. That was his dad, Rudolph, who was a violinist. He didn’t have any footage of his dad playing, so they went back and forth in editing to make it look like his dad was playing the violin — and he was so happy to give his dad that kind of artistic props. Every time I see that logo, I think about that moment. I felt very privileged to be part of his extended family.

When I made career decisions, he was really supportive and the fact that he came back to me, as he did with a number of other actors that he used again, I did feel like I was part of his family. He was able to let the bird fly away from the nest and then come back. I was very grateful to him; he was always so positive and supportive. That was his way. I’ve worked with a lot of different producers, and I can’t say the same

from FB, one of the best and greatest actors out IMHO

Interview with Dennis Franz on the death of Steven Bochco

I met Steven Bochco at an audition for “Hill Street Blues,” when I was going in for the role of Sal Benedetto. There was the usual group of people standing around, but there was one guy in the corner with graying hair flipping a basketball in the air. He threw it to me, and I caught it. That really broke the tension.

I understood the effect that he had on people. He was truly aware his presence could be a distraction, an intimidation, but he made us feel as comfortable as we possibly could, even if it was just to give you that Steven Bochco bear hug. He would wrap his arms around you and give you a big hug and a hello, and then he’d take off

When I was first approached about “NYPD Blue,” the scripts hadn’t been written yet. He’d called and said he’d like to do another police show in the vein of “Hill Street,” but it was going to be a more concise, introspective show with a smaller group of characters. I told him that I had done 27 cop roles and I did not want to do another one, but if I did, it would be with him and David Milch. It would have been foolish not to.

We were fully aware of how boundary-pushing it was going to be — he would go as far as the network would let him, not for any other reason than artistically he wanted it to be as realistic a portrayal as it could. On every level it was never intended to be a children’s show; it was by adults, for adults. He was tired of substitute words for curse words that people actually said. He wanted the dialogue to be as truthful as possible. But it was a Saturday afternoon special compared to some of the shows that are around now.

Over the years of “NYPD Blue,” we had a special relationship. We’d have dinner together, at least once a year. We’d meet in a small restaurant somewhere and talk about the season and the direction of the show and where the characters were going, and that meant so much to me. As a actor, you could not for ask anything more. I’m forever grateful for his belief in me over the years. I don’t take that lightly

He’s responsible for changing the face of network television. He will forever be looked at as one of the leaders in bringing truth and honesty as deep as you can on television in search for reality. He affected the dramatic format of television forever with “Hill Street Blues, “L.A. Law,” “NYPD Blue.” It was clear that audiences wanted to be challenged a little more, and he gave them that challenge in his artistry. I don’t think anyone could be more proud to be in a Steven Bochco show as an actor because of the admiration everyone had for his work and what he represented. The industry has lost a real icon. I was looking forward to the day that we’d be back together again. I truly was. But I waited too long.

Barbara Fan said:
I dont remember that at all
Dont know if it ever made UK TV
Click to expand...

It was on in Australia.

It was derided at the time but as a lover of both musicals and television drama I liked it.

Sad news, NYPD Blue is one of my favourite Detective Series.

Austin: Several years after Cop Rock, I was doing a French-American TV movie in Geneva, Switzerland, that was very popular at the time, and when I was being interviewed for it, one of the reporters was just raving about Cop Rock and how fabulous it was, and all of these other writers were nodding that, yes, it was so wonderful… and they didn’t seem to know it was a big bomb in America! [Laughs.] But, you know, they do so many limited series in Europe that it didn’t strike them as odd that we only did those few episodes or that we didn’t do a second series. It was just, “How does it feel to have been part of the fabulous Cop Rock?” And I said, “Oh, it was amazing!” I just kept it to myself that the reason there’d only been that many episodes was that it had been canceled. I figured, “Hey, if they think it’s great, let’s go with that!”
“All art is unstable. Its meaning is not necessarily that implied by the author. There is no authoritative voice. There are only multiple readings.” - David Bowie

I have no recollection of seeing her but then it's possible we didn't even get the full run.