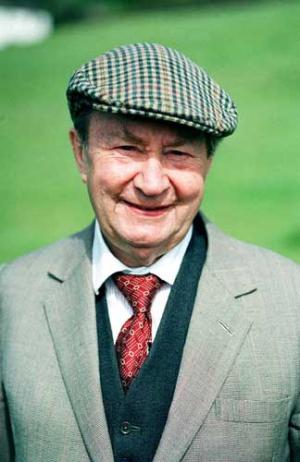 Though a familiar face on television and a seasoned performer on the West End stage, Peter Sallis was not what you would call a star. Success came late in life for him when in his fifties he won the nation’s hearts as the mildly philosophical, cloth-capped Clegg, one of a trio of retired misfits who seemed to do little else with their lives save roam the picturesque Yorkshire Dales in the BBC sitcom Last of the Summer Wine.

“The role of Clegg literally changed my life,” he once said.

Born on 1st February 1921 in the London suburb of Twickenham, not far from the famous film studios and educated at Minchenden Grammar School in Southgate, Sallis was pressured into following his bank manager father into the "family business" and took a position as a teller at a London branch of Barclays. It was a job he detested and never got to grips with, often being forced to stay behind after hours to put right his mistakes.

His life, like so many others, altered dramatically upon the outbreak of the Second World War. It was while serving as a radio instructor at the RAF College Cranwell that Sallis met Peter Bridge, later a leading impresario, and was cast as David Bliss in an amateur production of Noel Coward’s Hay Fever. Sallis had always been interested in showbusiness, his own mother played piano for professional singers and might have become an actress herself according to her son.

Sallis also made a habit of seeing a different play every week at a little theatre in Palmers Green. Although he never believed he ever stood a chance of being part of the profession, further experience in other RAF shows persuaded him to pursue an acting career and upon demobilisation he won a Korda scholarship, provided for ex-servicemen, to study at the Royal Academy of Dramatic Art in London.

In September 1946, not long after leaving drama school, Sallis made his London debut in a walk-on part in Sheridan’s The Scheming Lieutenant at the Arts Theatre. Three years in rep followed before his first speaking role on the West End stage. There then followed an uninterrupted series of roles in varied prestigious productions, Thomas Otway’s Venice Preserv’d opposite John Gielgud, Orson Welles’ stage version of Moby Dick, Look after Lulu co-starring Vivien Leigh and Eugene Ionesco’s Rhinoceros with Laurence Olivier.

Sallis’ Broadway debut arrived in the John Osborne play Inadmissible Evidence, and he would return to the New York stage a few years later in the most unlikeliest of roles, that of a singing Dr Watson in a musical version of the Sherlock Holmes stories.

In 1957 Sallis married the actress Elaine Usher. Theirs was a whirlwind relationship with no less than 16 separations. In 1965 Elaine sued Sallis for divorce on the grounds of desertion and adultery. Yet however frequent were his dalliances and absences from the family home, the couple were always reconciled. They had one child, a son Crispian who went on to become a successful film production designer and set decorator working on such diverse fare as Aliens (1986), Driving Miss Daisy (1989) and Gladiator (2000).

While his lothario antics sometimes made the news columns, the public remained very much in the dark about the off-screen Peter Sallis, as he rarely discussed his private life in interviews. Ostensibly a gentle man, quietly spoken and impeccably polite, shy almost, this went against the grain of the characters he was often asked to play up until Last of the Summer Wine’s Clegg, insignificant small men or villains, which he always preferred, being more demanding and interesting to play.

Though he appeared in several films, including Saturday Night and Sunday Morning, The Millionairess opposite Sophia Loren and Peter Sellers and a couple of penny dreadfuls from the horror studios of Hammer, Sallis never considered himself as having a film career, his supporting roles requiring only a few days work to complete. It was on television where his skills as a character actor were best employed, dating back to the days of live transmissions when he played the title role in The Diary of Samuel Pepys, a performance that stuck in the memory as he set his wig on fire.

It was on television where he also found his greatest success in Last of the Summer Wine which began life as a one-off drama for the BBC’s Comedy Playhouse in 1973. It was not an immediate hit with the public, but the corporation stuck with the programme and was rewarded by seeing it develop into the longest running comedy on television, which at its peak in 1985 was attracting audiences of 18 million. Even the village where the series was filmed, Holmfirth, became a tourist attraction in its own right. The critics were baffled by its success, though James Gilbert, a former head of BBC comedy, said the secret of its appeal lay in its innocence.

Clegg and his compatriots, Foggy (Brian Wilde) and loveable layabout Compo (Bill Owen), enjoy a carefree second childhood, engaging in romps and childish pranks. Sallis himself referred to the main characters as “simply three children who’ve reached pensionable age,” which may explain why many of the show’s fans were young children.

Writer Roy Clarke had Sallis in mind when he wrote the character of Clegg and the actor often admitted to being quite like him in real life. Just how deeply Sallis felt for the character was exposed in 1988 when he was the only cast member to appear in the spin-off series which presented the Last of the Summer Wine characters in their formative years. Sallis was cast as Clegg’s father. Also in interviews he refused to admit being trapped or typecast in the role, indeed expressed a desire to carry on making the series for as long as the public craved it.

Concurrent with the success of Wine Sallis enjoyed an unexpected second career as a voiceover artist, providing the voice of rat in the 1980s animation series The Wind in the Willows. And most famously of all creating another cult hero to rank alongside Clegg he gave life to Nick Park’s wonderful creation of Wallace in the Oscar winning Wallace and Gromit films.

Another very sad loss. Peter Sallis was a very versatile performer throughout his long career.

I was watching him recently in an episode of ITC's H. G. Wells' Invisible Man from the late 1950s. Sad to say that the sole surviving regular from that show, Deborah Watling (who I encountered several times) passed away nine days ago. Peter Sallis worked with her on Doctor Who in 1967, where she played the Doctor's companion, Victoria Waterfield.