It's gonna be interesting to see how the follow up on the success of the first one. Seems like they are doing the whole backstory jumping back in time with young actors playing Donna etc. I had not expected that. I guess that means we'll see less of Meryl Streep, Pierce Brosnan etc this time around...

Also I wonder if the women of ABBA will also get to do cameos in the movies this time?
Last time Björn and Benny did but the ladies weren't even asked about it.

Excited for this! Cant wait to see it.

Colin Firth and Cher ---- I'll watch it and I'll love it, no matter if the movie is good or not.
If I didn't focus on the good and fun in life, I'd be seriously bummed out by the state this world is in and has always been in.

The premiere is later this month. So is anyone excited to watch this movie?

This is a movie I should adore but for some reason I just hate it (Mamma Mia Part 1). I can not get over how BAD the instrumentals are. They sound like cheep synthesizers. I can appreciate actors singing with their own voices, though it gets really bad at times, but the background music is miserable. ABBA had such amazing, crisp sounding instruments and sound, couldn't they use the same ones? I expect Part 2 to be the same.

Plus the beyond annoying female friends of Meryl's character. Can not stand them. 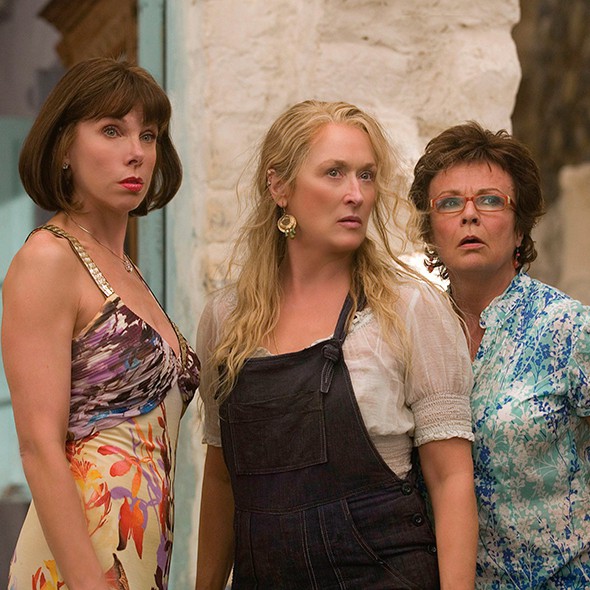 ginnyfan said:
This is a movie I should adore but for some reason I just hate it (Mamma Mia Part 1).
Click to expand...

I watched the first half hour once and it seemed like some horribly perverse joke. You combine the exquisite darkness of Abba with Meryl 'Sophie's Choice' Streep and this is the result?? I'd like to like it -- Mark Kermode's description below is quite persuasive -- but I've yet to be tempted to sit through it again.

Few movies deserve the sobriquet 'so bad it's brilliant' but this rollickingly rubbish adaptation of an already transparently terrible stage show is an exception. Indeed, despite (or perhaps because of) its undeniable awfulness, Mamma Mia! has turned out to be one of the real treats of the year, a flower of fun amid a desert of dirge that makes you want to stand up and shout thank you for the music!

The (surely parodic?) plot is a poptastic pile-up of Abba song titles in which a young chiquitita says, 'I do, I do, I do, I do, I do' to her honey honey but then faces her Waterloo because her ageing dancing queen mamma mia doesn't know which man after midnight gave her gave her gave her a child, so she must take a chance on three potential dads (sadly, none of whom are named Fernando) to see which winner will take it all up the aisle on the big day. Voulez vous?

What may have been crowd-pleasingly camp on stage erupts into something altogether more cataclysmic in a film which has been lovingly miscast to a man. Colin Firth can't dance, Stellan Skarsgård can barely speak, and Pierce Brosnan cannot sing a note, although this doesn't stop him from taking a running jump at 'SOS' to knuckle-chewing effect. By contrast, a nimble dungaree-clad Meryl Streep approaches Benny and Björn's ditties as if they were Shakespearean soliloquies, with ravishingly ripe results.

And through it all the songs remain utterly indestructible, lifting the soul, tapping the toes, and ultimately conjuring a stunning reversal of fortune in which shock and awe turn to delectation and delight and everyone goes home a happier, better person. Go on - treat yourself; rarely has something so wrong felt so right.

Last edited: Jul 9, 2018
“All art is unstable. Its meaning is not necessarily that implied by the author. There is no authoritative voice. There are only multiple readings.” - David Bowie

I don't think it really matters how good or bad these musicals and movies are. It's pop culture based on pop culture, and then take it to extremes.
In fact so extreme that now the camp gimmick has become a camp parody (!) and, according to Mr Kermode, a so bad it's brilliant (!) parody on a gimmick based on pop culture.

As for the pop culture itself, I think it shows how ABBA's music is being both overrated and underrated.
It's great pop music but that doesn't make it exceptional. It's music that was meant to be enjoyed and also to provide an income for the artists.
If you're not one of the artist then all you have to do is to enjoy it. Or listen to something else if you think it's not good enough. Or too cheesy. Or too euro. Or too...whatever.

If you want to spend an evening racking your brains, trying to figure out what ABBA means, then I guess these kind of movies are helpful. If you can decide for yourself where camp ends and plain rubbish begins.
Anyway, enjoy part II everyone, I'm sure that's the whole point of this movie.
But, unlike ABBA's great-but-not-exceptional original songs, I don't think it offers much to chew on.

Willie Oleson said:
As for the pop culture itself, I think it shows how ABBA's music is being both overrated and underrated.
Click to expand...

Hmmm ... inter-res-ting.
“All art is unstable. Its meaning is not necessarily that implied by the author. There is no authoritative voice. There are only multiple readings.” - David Bowie

Well, the way I see it: they're using ABBA's music as an excuse to make these musicals and movies and to me that feels like explaining a joke to someone who doesn't get it (the joke).
I'm not saying that ABBA's music is the joke, I'm merely considering the effects of the movies and the explanation (of whatever joke).

Apart from the total cliché (why not Boney M's music, for change?) I don't really need a movie showing me how much fun ABBA's music can be - and for that matter, how dark and melancholic (but do they ever get that part?)
At the same time I'm not sure if ABBA's music is sooo universal that all you have to do is shuffle those songs together to get a great story out of it.

But I also don't consider ABBA's songs lightweight enough to support these half-baked coverversions, even if they are performed by former James Bonds.
ABBA (the original) works as nostalgia and it worked for Muriel's Wedding. It's not an nostalgic movie, but the music still is.
Another thing these musicals and movie-musicals don't get is that ABBA music wasn't camp. It was not-really-hip but very popular music and I can imagine how confusing it must have been to be a young ABBA fan in the 1970s (nice concept for a movie).

Erasure thought it was camp, hence the parody videos - and at least the timing was perfect. 1992, yes absolutely.
The reply-gimmick by Bjorn Again (Erasure-ish EP) was much funnier, btw.

If there has to be an ABBA movie then:
-base the story on one song.
or
-a story about a group of people (maybe some ordinary villagers) in the process of making an ABBA musical. And then that fun and seemingly not so difficult project turns into big drama. Their failure would highlight the magic of ABBA's music: it can't be musicalled.
or
-a fanclub movie, about a meet & greet that's never going to happen, something in the style of Come Back to the Five and Dime, Jimmy Dean, Jimmy Dean. 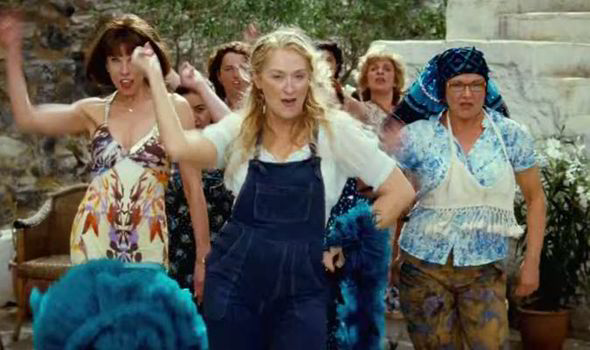 The first time I saw Mamma Mia I thought it was terrible. I guess I was expecting somehow that the songs be executed in the same magical style that ABBA created them. They are not, and the film doesn't really feature trained singers with great voices. Now when I see it I just think it's silly fluff fun. I cant hate it because it doesn't live up to the wonderful magical recordings of ABBA. I will always have those. This is just a little fun and a little buzz surrounding ABBA. If it makes someone sit up and pay attention to ABBA then that's great. If it's just a life long ABBA fan appreciating their favourite group in a different way then that's great too.

I have to say though, what kills musicals for me now is when actors that just aren't great singers tackle these songs that were written for and performed by people with outstanding voices.

I absolutely detested Les Miserables when the movie came out a few years back too. And that show has some beautifully written music in it. All mostly ruined by thin reedy voices recorded on set by people who just couldn't sing.

I watched the first on TV a while ago but I can barely remember it now so I'm pretty indifferent to a sequel. Are there really enough ABBA hits for an entire second movie or are they just the same ones recycled?

Seaviewer said:
Are there really enough ABBA hits for an entire second movie or are they just the same ones recycled?
Click to expand...

Oh sure there are. They have a great back catalogue. I'm sure a few will be repeated though, even if in some kind of reprisal. I mean they had ABBA Gold, then we got More ABBA Gold. There quite a few ABBA Greatest Hits releases actually.

Seaviewer said:
Are there really enough ABBA hits for an entire second movie
Click to expand...

3. One of Us
Amanda Seyfried and Dominic Cooper

5. Why Did It Have to Be Me?
Josh Dylan, Lily James and Hugh Skinner

6. I Have a Dream
Lily James

9. The Name of the Game
Lily James

14. I've Been Waiting for You
Amanda Seyfried, Christine Baranski and Julie Walters

17. Super Trouper
Pretty much everyone tbh

I have to say I only recognise 8 of the 18 titles but that probably says more for my ignorance than ABBA's hit-making.

I recognize all of the songs. But then again I have all of ABBA's original albums on CD.

In the first Mamma Mia! They used these songs:

So this means that they have recycled the following hits:

So it's not too bad really.

Also I wonder if they will keep the lyrics: "I'm sure I had my dinner watching something on TV. There's not, I think, a single episode of Dallas that I didn't see!" in the song "The Day Before You Came"...