I like your ideas, Rove! The writers and producers had the chance to do just that after Bobby's death, but blew it big time! The storylines in the dream season were overall boring (with Ray/Donna being the exception). Thus, it would have been better to have ended Dallas sooner, IMO!

Rove said:
On this point I'll politely disagree. Bobby's death should have been the catalyst for the ultimate show down between the Ewing and Barnes family with particular interest on JR and Pam. From the moment Bobby came home to Southfork with "that Barnes woman" this is what Dallas had been leading to. I have no interest in Larry suggesting there was room only for one JR. Dallas was bigger than him. Scenes between JR and Pam were leading to the final blow out of Dallas. There was the scene of Pam storming the Ewing building and threatening JR because of his involvement in having her looking for Mark. Another one was JR patiently waiting in his car when Cliff was arrested for the attempted murder of Bobby. The look on Pam's face as JR drove away was priceless. Another great scene between the two was when Pam confronted JR outside Ewing offices and again threatened JR. His reaction was one of, "Crap, I think I've pissed that Barnes woman off one too many times."

Upon the reading of Bobby's Will everything was set in motion. We've witnessed Pam going from strength, to potentially throwing herself off a building, to a strong and independent wealthy woman, with the assistance of a dead mother and husband. Placing her in the dungeon that was the Ewing Office is exactly what I had been hoping for. Was I going to miss Bobby? Absolutely! But just like Jock's death Bobby could have had a lasting effect on the story.

Now sit back and watch the thrilling ride of JR vs. Pam. Everyone would have been caught in the cross-hairs, Miss Ellie, Clayton, Sue Ellen, Ray, Donna, Cliff and the Cartel. I wanted drama. I wanted a thrill ride that would have left you breathless. I wanted Pam to bitch-slap JR, both physically and in business.

I'd suggest two more seasons after "Swan Song" could easily have appeased our appetite...then end it. Finish the show before someone else brings down that curtain. Dallas could easily have become a classic, entering folklore, instead of the "I'm stuck in quicksand" mess it became.

Glad I got that off my chest.
Click to expand...

Thanks for posting. She's just so effortlessly gracious. I could never be that nice.
“All art is unstable. Its meaning is not necessarily that implied by the author. There is no authoritative voice. There are only multiple readings.” - David Bowie

Ms Southworth said:
Thus, maybe the payoff wasn't there for the network anymore?
Click to expand...

When those first numbers (U.S. ratings) came in after the first screening of TNT Dallas everyone involved must have breathed a sigh of relief. Imagine their horror as half the number of people returned to watch the following episode and from that point the numbers kept slipping. Interesting that so-called experts in their chosen field believe they understand what the viewer wants. How wrong they were. And where are those people responsible for the screw up that was TNT Dallas? Probably still working in the industry.

Ms Southworth said:
In the the interview, Linda said that the thing that upset her the most about the sudden cancellation of Dallas was the lack of respect towards the fans. She said that the fans had deserved a proper ending to Dallas! An ending that wrapped things up and didn't leave things hanging in the wind, so to speak!
Click to expand...

As much as I'd love to see a fitting and final episode of Dallas (preferably a tele-movie) I'd be paranoid they'd ask the same people responsible for the mess they created and left behind.

I know a couple of people going - so looking forward to hearing about it.

What a nice idea! I'm also looking forward to hearing about it.

I love Linda, she's 76 and looks smashing. Although I will say I'm a bit disappointed in both of them after reading Larry's daughter's autobiography. But then again, I think Patrick help ruin the show so with him, I can't even be bothered. But I would always to be thrilled to see Linda Gray anywhere, anytime. I'll never stop loving her.

A few pics from today 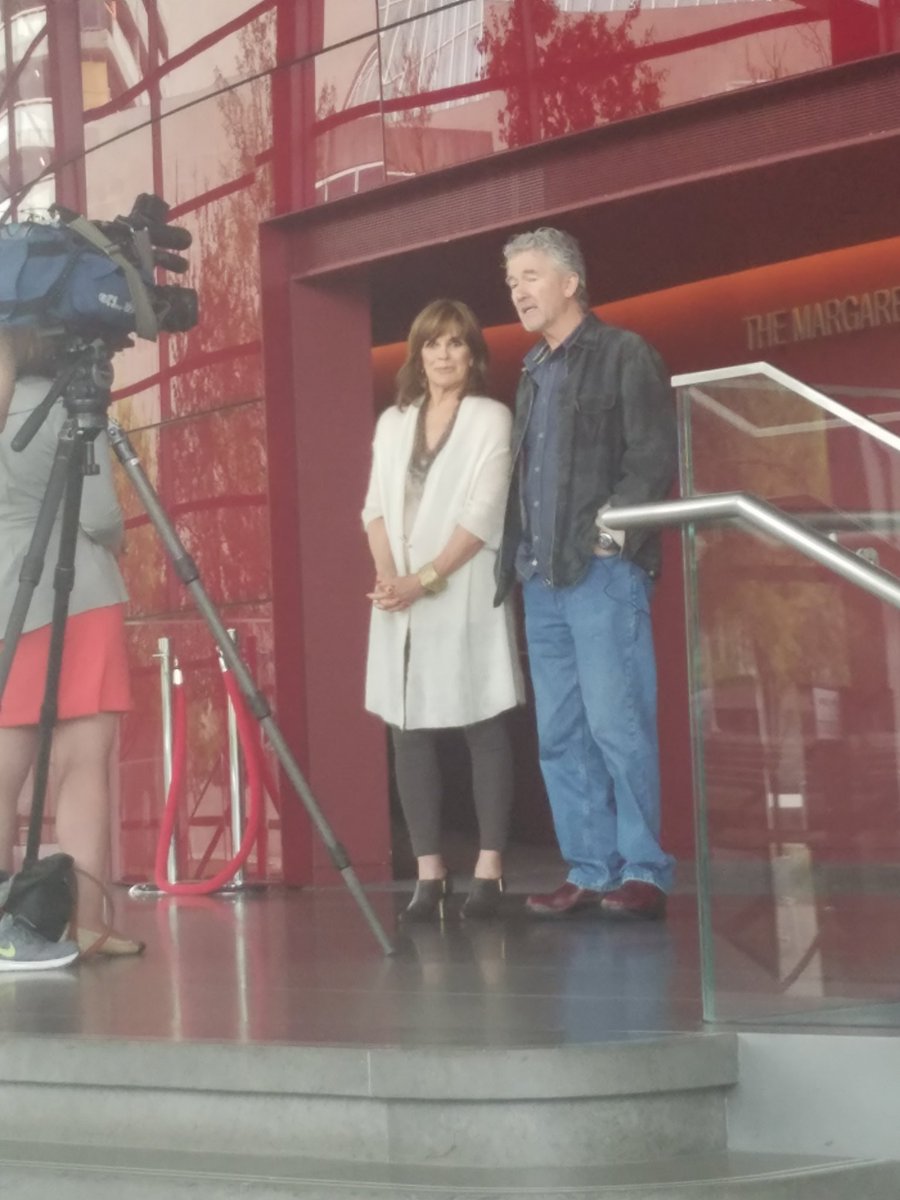 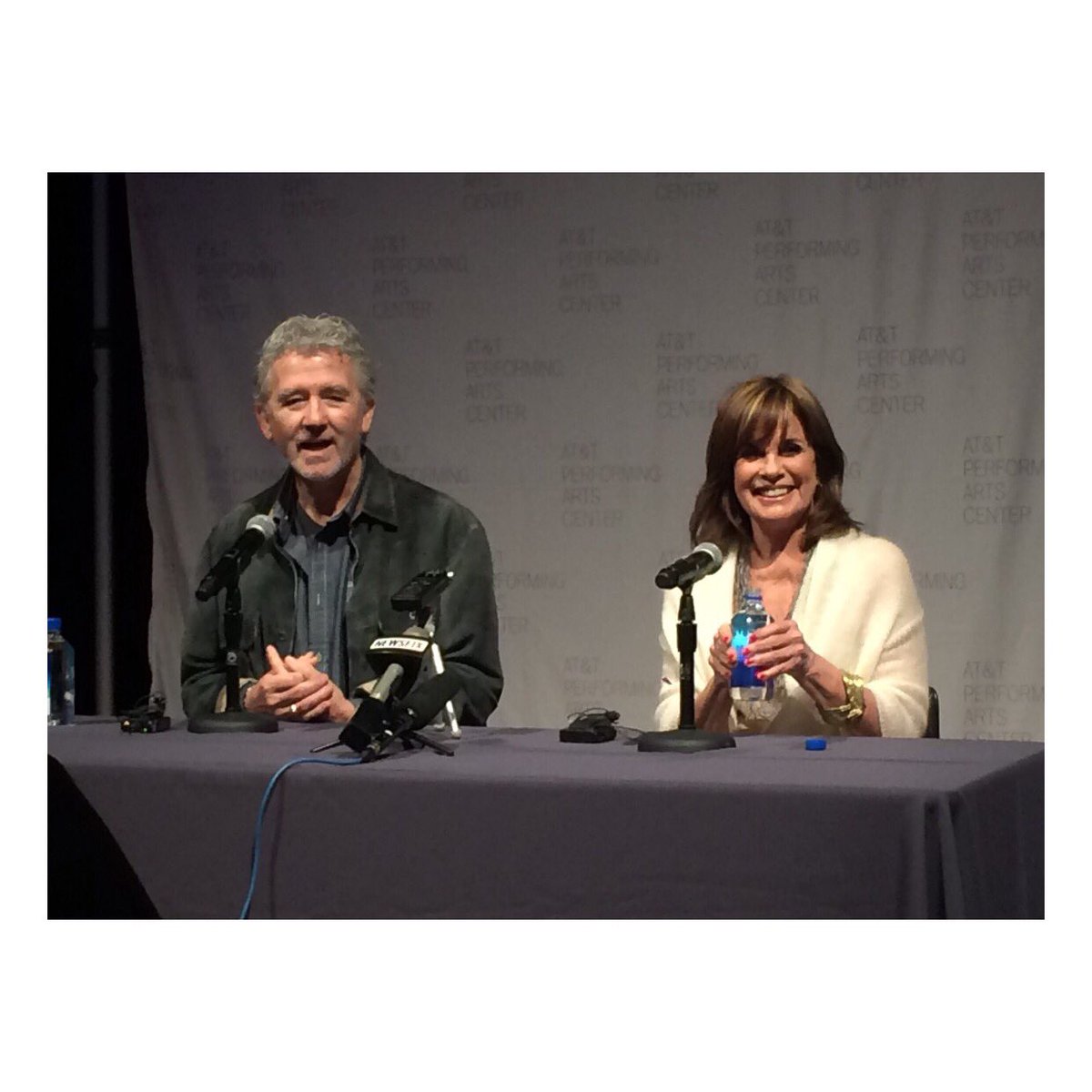 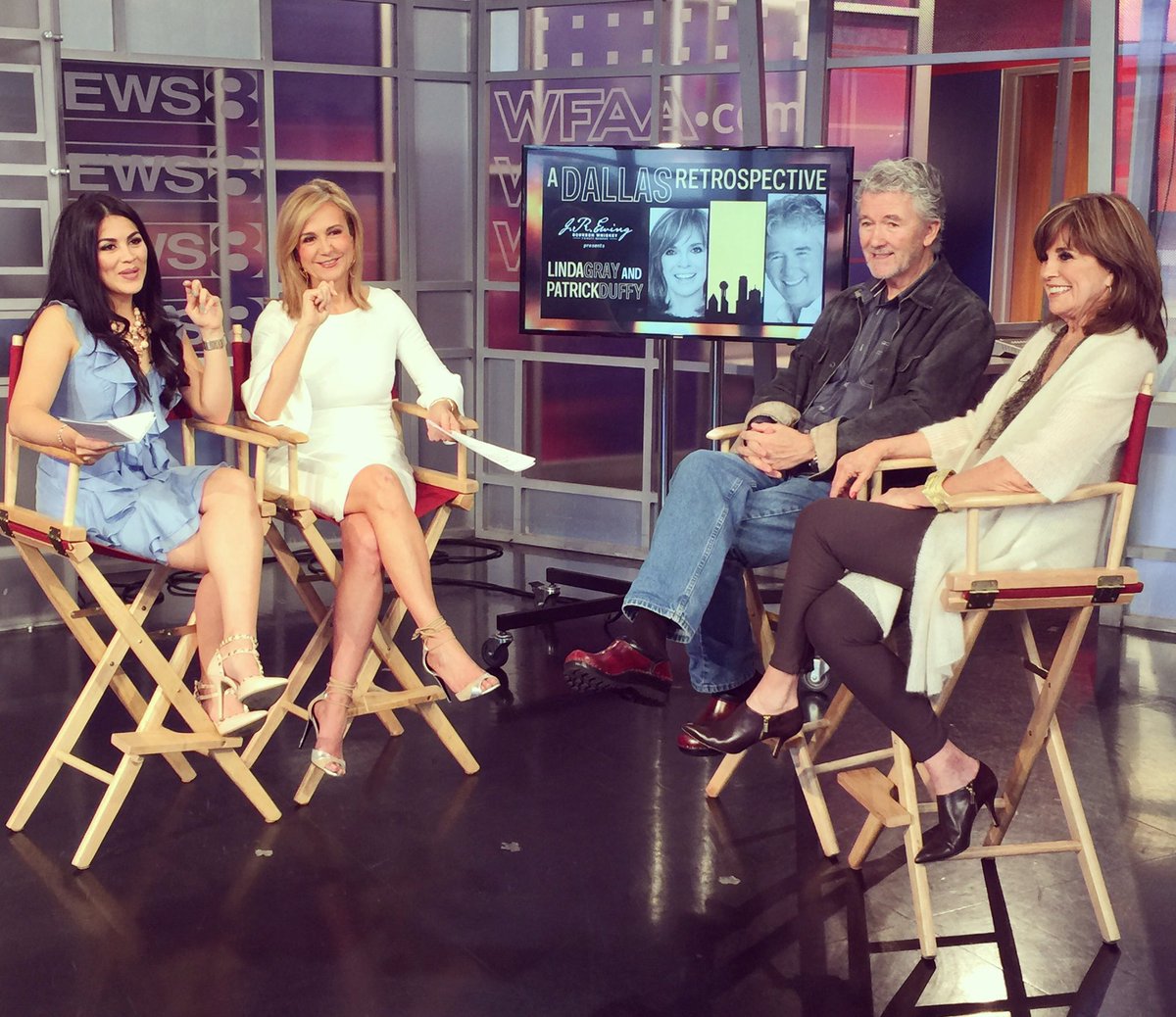 Thanks for sharing the great pictures!

I do hope that both Linda and Patrick will look more glamorous tomorrow night! While I totally love Linda's hair and makeup in the photos, her outfit isn't quite "right", IMO! Patrick looks like he just jumped off a hay ride (both outfit and shoes ...

Linda and Patrick look like they're really enjoying themselves! I can't wait to hear more about tomorrow night's event in Dallas!

Thanks for sharing Tina. I enjoyed watching both interviews. It was nice to see something new with Linda and Patrick.

I wish they'd stop complimenting CC on her pilot script though since as the ratings proved she could not really write Dallas!
It's sort of funny how all the fans know that the reason the show failed was because of the writing and yet the stars are still clueless.

Cut Patrick some slack on his appearance Ms Southworth, I mean the man just lost his wife less than 3 months ago.
So considering it's good to see that he's back to work and that he hasn't lost his sense of humour.

Me too look forward to hear more about this event later this week.

Thanks a lot Tina for posting the interview with Patrick and Linda ,I'm very happy to see Patrick again I just find him a little tired , but always with his great sense of humour after his recent wife's lost ,he's very courageous ,I can't wait to see more things about the rétrospective of today anyway great pics Tina and Merci !!!

Thanks a lot for the links @Tina Ewing, they´re great!!
Fanfics continuing in the future:
"Ewing Empire: Season 6"
"Star: A Hollywood Saga"
"Return to Knots Landing"

I really hope tonight goes well and isn't spoiled by the antics of the stalker who has blighted at least 3 events now that Linda has been at. Hopefully security will be in place to reign this person in.

I think they both look great - I wouldn't actually care if they came on stage naked.

I don't think they are clueless @Karin Schill - I think they were just trying to stay positive about the project.
Last edited: Mar 23, 2017

Great video from the press conference:

Karin Schill said:
Thanks for sharing Tina. I enjoyed watching both interviews. It was nice to see something new with Linda and Patrick.

I wish they'd stop complimenting CC on her pilot script though since as the ratings proved she could not really write Dallas!
It's sort of funny how all the fans know that the reason the show failed was because of the writing and yet the stars are still clueless.

Cut Patrick some slack on his appearance Ms Southworth, I mean the man just lost his wife less than 3 months ago.
So considering it's good to see that he's back to work and that he hasn't lost his sense of humour.

Me too look forward to hear more about this event later this week.
Click to expand...

Yeah, it makes no sense to keep praising TNT Dallas, when a large percentage of the longtime and faithful Dallas fans disapprove! 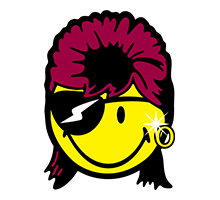 I guess that LG and PD somehow could have been sworn to "secrecy" or to NOT say anything negative about TNT Dallas, but then again .... naaahhhhh

... I just said what a lot of people were thinking! PD didn't (and maybe didn't want to) look like the sex symbol that he always has been known as, which is quite understandable under the circumstances! But as my mom would say ... always dress appropriately and make sure that you're presentable according to the event that you are attending! :cooler: I love PD, his work and life accomplishments and thus only wish the very best for him ... also in the years to come!
Last edited: Mar 23, 2017
You must log in or register to reply here.
Share:
Facebook Twitter Reddit Pinterest Tumblr WhatsApp Email Link
Top