Michael Torrance said:
I do acknowledge that DALLAS shaped the genre which DYNASTY followed
Click to expand...

Of course, and DALLAS wasn't just the one who did it first, it was an international smash hit. Like I said, it would almost be impossible not to mention it.
I could even accept a comparison about the impact of both show, and Dynasty apparently didn't deliver in the ratings.
But when I read some of those reviews I get the idea that these simple facts have to be explained and justified. It becomes the point of view of the review.
No matter how great the soap is, it will be explained as something that "didn't work", as something that "wasn't as successful as Dallas" - and that's when the review beomes terribly biased.

Dallas was the biggest, but it was not a better Dynasty or a better Knots Landing. And it's mostly the characters that make the show, not the story (imho).
Furthermore, a very strong premise or theme can also be a hindrance to soap operas. Those big feuds in Dallas and Dynasty got a little repetitive at some point, but they were stuck with it.

I have closely studied every scene between Blake/John and Krystle/Linda.
You can tell her insecurity in the love/fire scenes. She seems afraid to really act and be in the moment, when she is not Linda anymore but Krystle. A bit disappointing because Johns acts really well. There is so much natural chemistry and it's left unused when one is holding back. I understand how nervous you must be in the beginning forming "the relationship" on both sides, but it sits with her still in season 5. You don't notice a real change before season 7, there she finally is more comfortable and she IS Krystle. But by then, Dynasty was pretty much over and you stopped caring.

Blake and Krystle could have been more, saying much on the fact how perfect they yet were.
Last edited: Apr 2, 2020
the love that lives forever

Blake,
to need a woman you've got to know
how the strong get weak and the rich get poor.

Snarky's Ghost said:
Yeah, they've definitely reined in Krystle's spasminess from mid-season 5 to the end of the year. I had never really noticed this before, but somebody did something -- either the producers (seems unlikely) or Linda herself (more likely) who was still able to adjust her own performance when necessary because she wasn't quite as automated (or "stultified" as Gordon Thomson once described Linda) to the degree she would soon be.

Funny, you can easily see that the creators are really, really trying as hard as they can in Season 5. But between that Spelling Dumbness Vibe that all Aaron's shows display, DYNASTY's specific Static Acting Directive, a slew of tired romantic triangle plots, and the usual "Why Don't You Share Your Pain With Me??" dialogue which doesn't help move the stated storylines along, this colorful, stilted mess is about as good as you can expect. 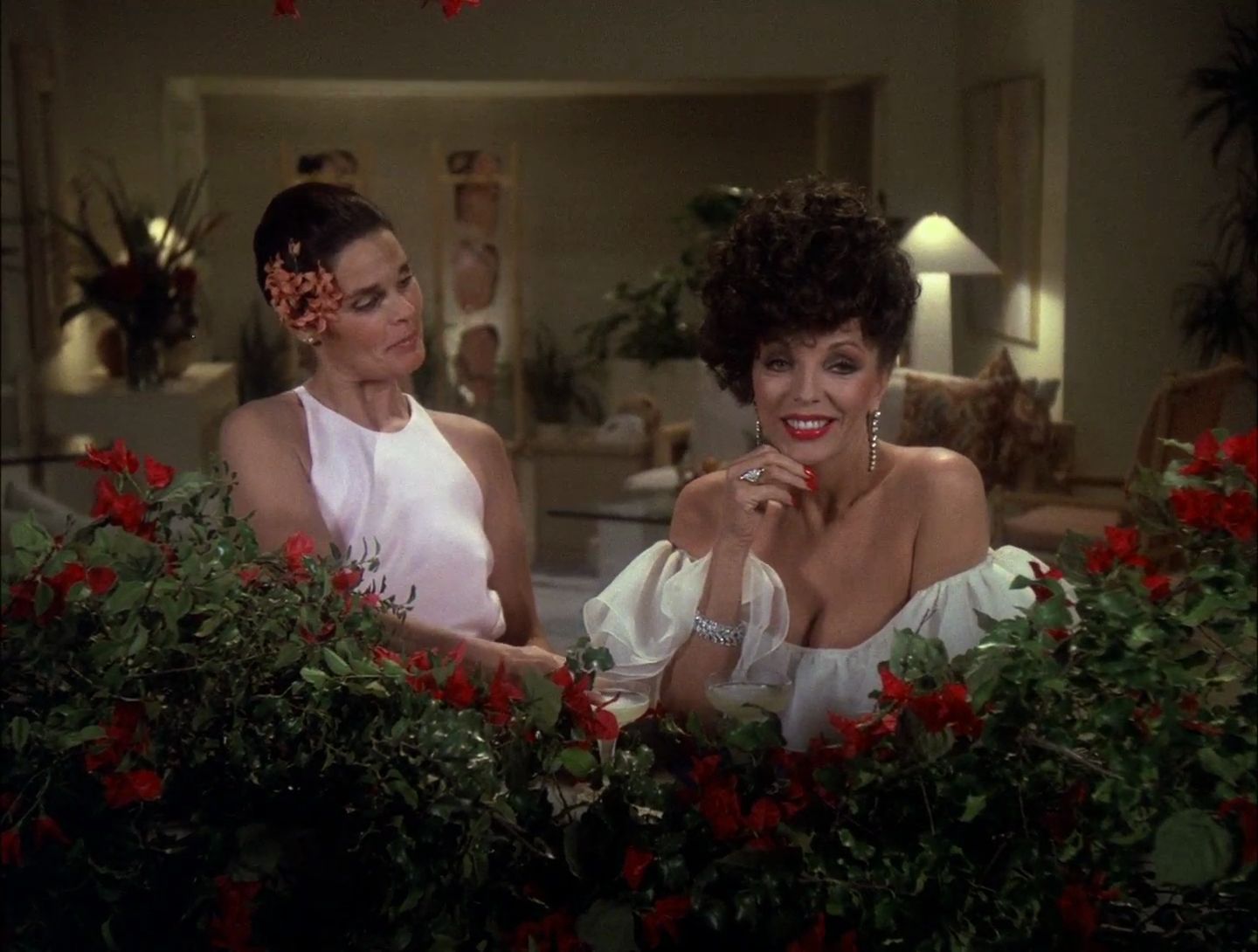 YOU MUST BE TIRED.

Krystle walking out when finally confronting Blake's hypocrite-attitude (Ashley/Daniel) bugged the hell out of me. A great scene turned to mush, when Linda acted for once and Krystle was back in season 1 and 2-mode.

I'll never be over it.
the love that lives forever

Blake,
to need a woman you've got to know
how the strong get weak and the rich get poor.

Richard Channing said:
Ali McGraw deserves a Golden Raspberry award or the TV equivalent for this performance. Possibly one of the worst I've seen on any soap. Every line she utters is excruciatingly bad. What the hell is wrong with her?? She had been good in other things so I don't know what went wrong on Dynasty.

I do love the line: "Remember the Boston Tea Party".
Hissed out and Alexis' look is priceless.