"As Blake seeks justice in the wake of a disturbing crime, Fallon and Sam covertly fly to Paris to investigate the truth behind a distressing phone call."
Extra Reading: https://dynastytv.fandom.com/wiki/Parisian_Legend_Has_It... 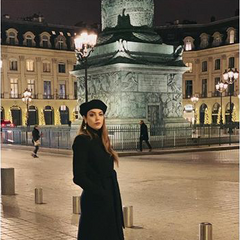 So did they really fly to Europe to shoot this? Wow..

Matthew Blaisdel said:
So did they really fly to Europe to shoot this? Wow..
Click to expand...

That's it. There is no bigger affront to the original than this! J'accuse, pêche Dynastie!

Heck, Adam Huber even did a humorous social-media posting where he basically said "They got to go to Paris? Well, no, I'm not jealous at all..." as he was totes jealous.

Not only that--by then Dallas had reached heights of unreality the Peach Dynasty has yet to match.

Could this be the introduction of NuSteven II?

I've been thinking the same thing, if only because a remote in Paris is not something you do on a lark, especially a lower-rated show. It has to be tied to some big plot development. If they're just doing a run-of-the-mill plotline, they can just fake it in the Atlanta area (think: "rural Paraguay" that looked suspiciously like the "rural Appalachians") or just have them studio-bound in the ubiquitous "French hotel" with a convenient view of the Eiffel Tower out the window. Having the three of them there and not have something really pivotal happen...well, it would be a waste of money and time.

Now, if skinny little Susan Lucci shows up firing a machine gun, I'd be a bit concerned, since they'd be doing an homage to the wrong show. But it would certainly be a twist no one expected. Sam would end up getting killed asking "Erica Kane" for her autograph.

Willie Oleson said:
Could this be the introduction of NuSteven II?
Click to expand...

Nope. James Mackay guest stars in this episode.
Some weeks ago there was already posted a scene picture here with the three of them having lunch in some place outside.
Last edited: Mar 14, 2019

Matthew Blaisdel said:
the three of them having lunch in some place outside
Click to expand...

Within the first minute: Baby Bye-bye; Mark No Bueno; MIA Steven calls Fallon with a LOL haircut. Tells Fallon that his jacket was stolen along with his passport.

Alexis is literally hiding in the bushes as the estate is teeming with police, a hearse, etc. No opening titles.

Fallon and Sam are off to Paris. Blake wants Alexis to sit with Cristal??? You think this will aid her recovery?

Something's askew with Steven (not just the hair). Sam gets the trope-tastic Parisian hotel room with the Eiffel Tower view like everyone else.

Who's George? George Emerson? I guess Sam isn't the only character with A Room With a View. It's interesting how F&S keep 'just barely missing' Steven's new bosom buddy.

A walk along the Seine. Fallon in a beret, Sam in a....coat of some sort. Fallon and Sam are watching Steven enjoy his wine at dinner, so they argue and Steven leaves.

Blake's sorta-hot lackey denies he did anything, that he called it off when Blake left the message. Cristal is distraught. Alexis is quick to plant the idea that she saw S-HL on the grounds the day before anyway.

Apparently there are Carrington cousins in France??? Juliette even has Bo's favorite cousin attend her oh-so-French party.

Steven's eventual falling-apart scenes are unsettling, but seem so genuine. Not at all like the frothy stuff we typically see from these writers.

George pops in, the passport miraculously re-appears, then George disappears before Sam arrives, just as he seems to do the entire episode. Isn't Steven a bit old to have an imaginary friend?

Sorta-Hot Lackey ain't so hot any more, thanks to Blake using him as a punching bag. Cristal isn't too keen to see him, either. and poor Anders ends up having to take out the trash as usual. Glug, glug....

James Mackay hit it all out of the park, IMO. Too bad it looks like
He just got killed by RealAdam, his not-so-imaginary friend.
God, that final two minutes was chilling. Would have posted this sooner, but the site was not responding.

I wanted to find out what happened to Mark, and
sadly he was killed as I had suspected. What a waste!
In other news, the episode is actually keeping the tone serious--for now anyway. There is a huge (but not unexpected overall) twist and some nice pulling the wool over the audience's eyes, though it happens in the classic mode for CW shows, with a meteor-size suspension of disbelief.

But that's the thing--we did see Steven meet someone and go to the metro together before the title.

Somehow, I am not sure the implication was that
Adam killed Steven or that he incapacitated him somehow.

Daniel Avery said:
James Mackay hit it all out of the park, IMO. Too bad it looks like
He just got killed by RealAdam, his not-so-imaginary friend.
God, that final two minutes was chilling. Would have posted this sooner, but the site was not responding.
Click to expand...

I agree with your comment about James Mackay. It was actually a pretty decent, albeit dark episode. On your other comment, I never got that impression.
I was just thinking/hoping that maybe Adam was keeping him medicated and would continue to do so from a distance

Huh. If indeed
Adam is on the show for real, Kirby may finally have something to do now. And considering that she's been based more off of the old version of Sammy Jo, we might get a sliver of what-could-have-been-couple-Adam/SJ.

Oh my god, what was i just watching there?!

That was EASILY the best episode of the whole show so far. And BY FAR!

I NEVER expected that at this point!
The acting of James Mackay was top notch, what a huge mistake to to take him off the main cast, he's one of the most capable actors on this show!
He's clearly better than Jack Coleman was at the time and - to my opinion - in this episode even better than Al Corley was as Steven back then!
And those twists... did Blake really beat that guy to DEATH?!
And Anders covered up for him... just like Chao-Li did for Angela/Emma in the very first Falcon Crest episode. This is soap opera at it's BEST! I am truly thrilled!
And ... WHAT an entrance for Adam!

What a deeply emotional sentence from Fallon to Sam ... "Please stay at the mansion, I don't wanna lose another brother!" Just WOW! That was early seasons Pamela Sue Martin quality.
Her best line of that season, if not the whole show. THIS IS DYNASTY for the very first time since the beginning of this reboot!

If i go just 2 episodes back... it seems like a COMPLETLY different show!
Whoever claims that these episodes are in ANY way consistent is clearly out of his mind or doesn't watch the show at all, there must be at LEAST two completly different teams working on this who know absolutly NOTHING about each other's work. I've been saying this for months. It's like two completly different series. So strange!
Of course i like the way it is now and i so hope that it continues this way! This was SO awesome.

Easily 10 out of 10, hands down.
And was that really the last episode for Nicollette Sheridan? Hard to believe..
Last edited: Mar 16, 2019

Matthew Blaisdel said:
Oh my god, what was i just watching there?!
That was EASILY the best episode of the whole show so far. And BY FAR!

I NEVER expected that at this point!
(...)
Easily 10 out of 10, hands down.
And was that really the last episode for Nicollette Sheridan? Hard to believe..
Click to expand...

I agree with you Matthew! This episode looked like real soap opera and not the silly comedy show about riches sinking in the CW but seemingly succeeding on Netflix.

I love the way they've introduced Real Adam AT LAST! Being a creepy SOB like the original one. It's a pity the almost incestuous mother-son relationship between nuAdam and NuAlexis will not repeat in NuDynasty (because we know Alexis will say bye bye soon).
I also loved the subtle way to introduce Blake's disinherited brother "Benjamin" and his very french daughter Juliette (not Leslie), but eager to meet her very RICH french wife)
About "last episode for Nicolette" she has posted on Instagram and Twitter: "Oliver and I watching MY SECOND TO LAST EPISODE of cw-Dynasty" So, it's not the LAST... for now.
Last edited: Mar 16, 2019

Okay y’all have me all excited to watch this! I hadn’t watched the last two episodes. I figured I’d save them and just binge once the season had ended, but from these reviews it looks like I may need to tune in asap. Perhaps they were receiving the feedback about how light and uneventful the show had gotten and decided to course correct. Now I’m excited to see where the second half of the season goes.