And Littlefinger's reaction when Bran said "Chaos is a ladder". He probably knew right then that Bran knows more than he lets on. Cause those are the words Littlefinger used way back when talking to Varys in the throne room...

I love this video. Jaime's perspective.


He served under the Mad King Targaryen who only wanted to burn all people of King's Landing. Burn, burn, burn. So Jaime stabbed him. Who wouldn't have? Then Robert took over the throne, and let's face it: he was not a nice guy. He treated people like shit. He humiliated Cercei for years and years, which is the main reason why Jaime hated Robert. Ned Stark was Robert's best friend and new hand. So of course Jaime's not gonna like Ned either.
And now, Daenerys. Daughter of the Mad King. Also with a love for burning things and people...

Jaime wasn't thrilled with Cercei when she set people on fire - despite it being the High Sparrow and his army of fanatics. The look on his face when he found out at the end of season 6 was quite clear.

Jaime's just not a fan of using fire to kill people, or torturing people. Like when he gave Olenna the poison. He listed the plans Cercei had wanted for Olenna, but managed to talk Cercei into killing her humane. A fast painless poison.

I really like it in the novels that GRRM writes from all main characters' perspectives. It's so much easier to understand why a character does something when it's told from that person's first-person perspective.
If I didn't focus on the good and fun in life, I'd be seriously bummed out by the state this world is in and has always been in.

Behind the scenes: the filming of the loot train attack


Pretty darn impressive!!!!
If I didn't focus on the good and fun in life, I'd be seriously bummed out by the state this world is in and has always been in.

Finally a dragon DOES something! I have been waiting 7 season's for this!
Point of interest...Tyrion shows concern for Jaime...nice! (9:05 mark) Why wouldn't he? Jaime is his brother who cares for him and saved his life.

Jon Snow gets to work:

OMG, that is hysterical!

Bravo, whoever did this!
If I didn't focus on the good and fun in life, I'd be seriously bummed out by the state this world is in and has always been in.

Dragonstone, down below, the night before Jon shows Dany the cave ... 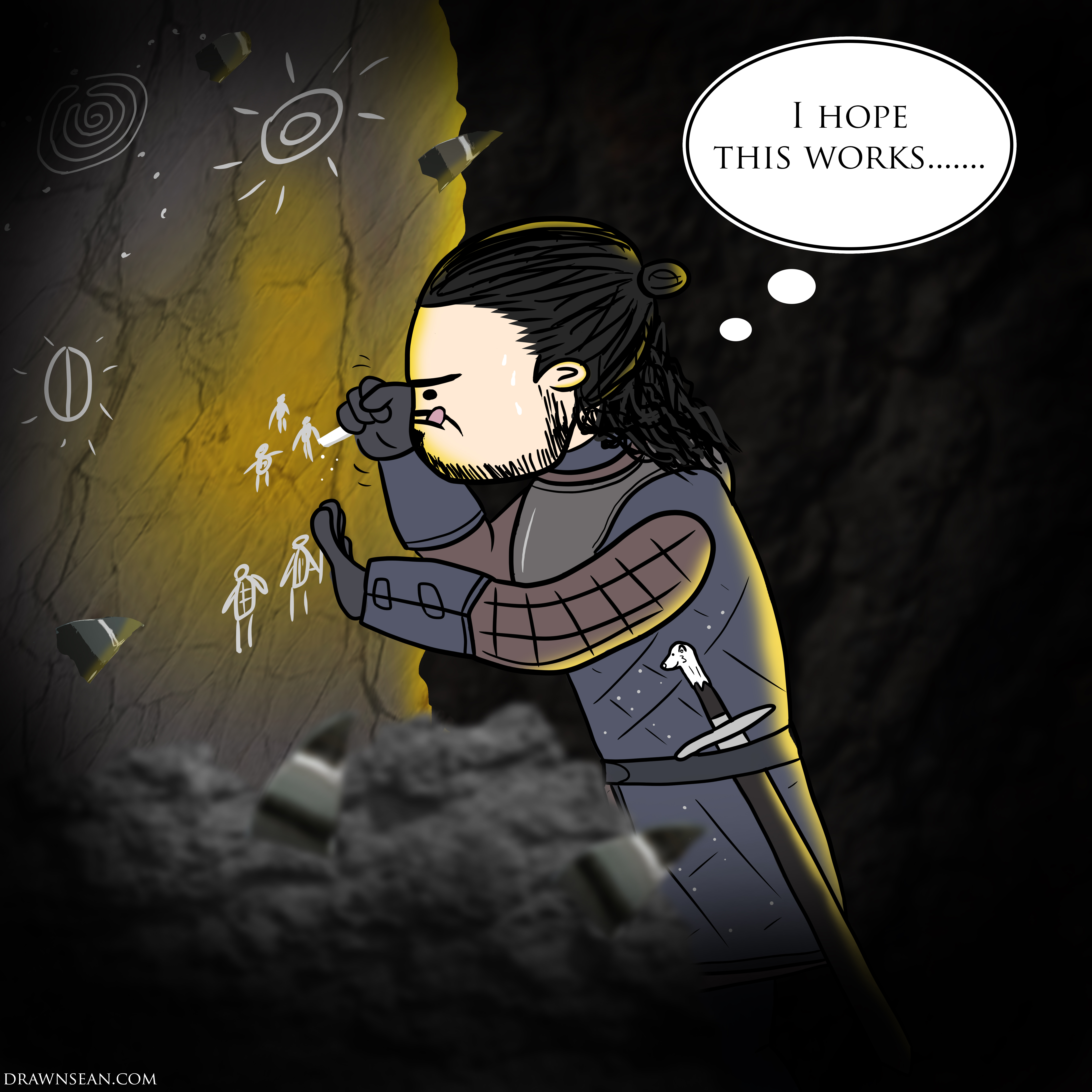 Next on Game of Thrones: 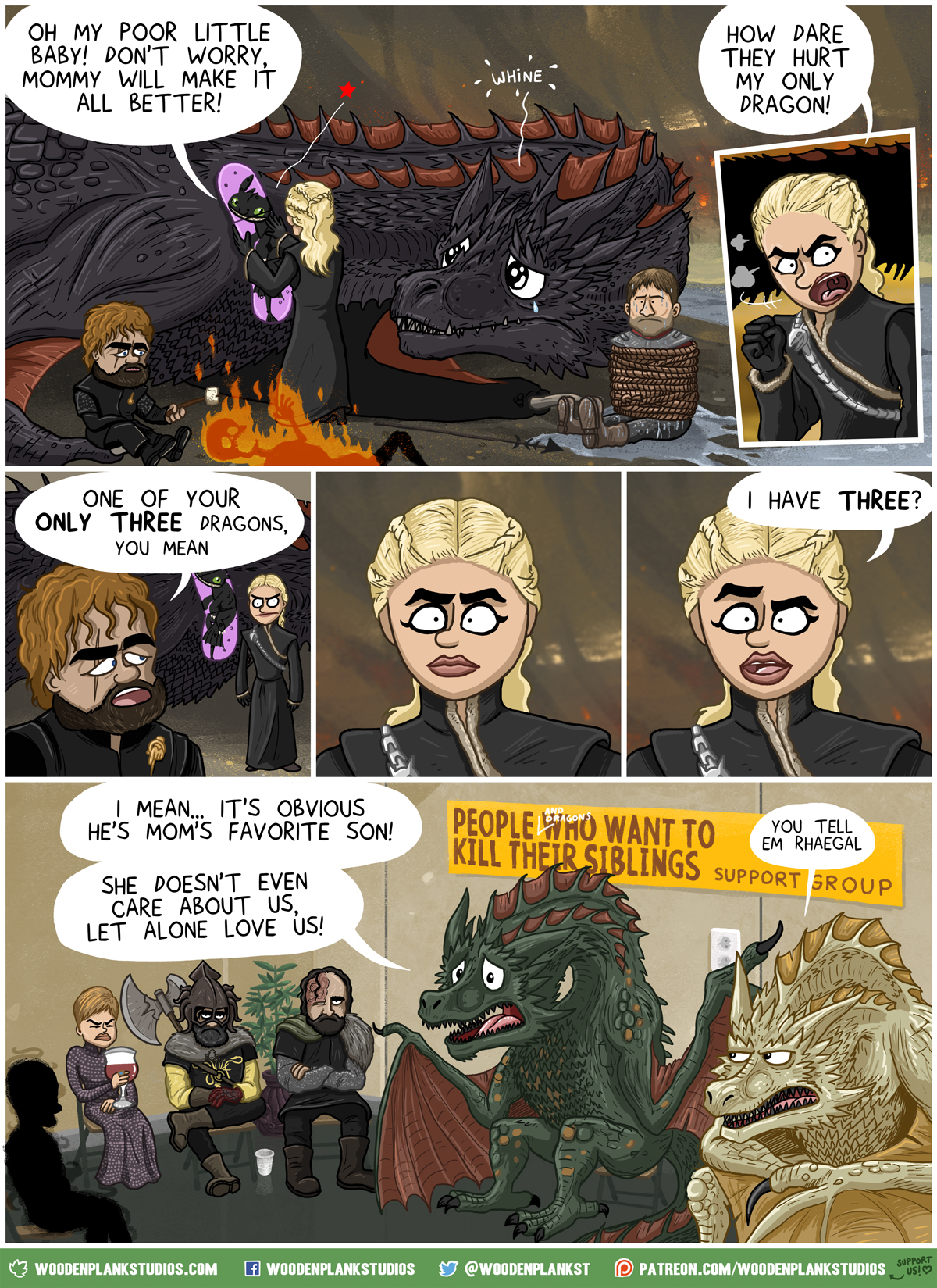 I love these cartoons! I saw them on Instragram yesterday. Lol then and lol now. 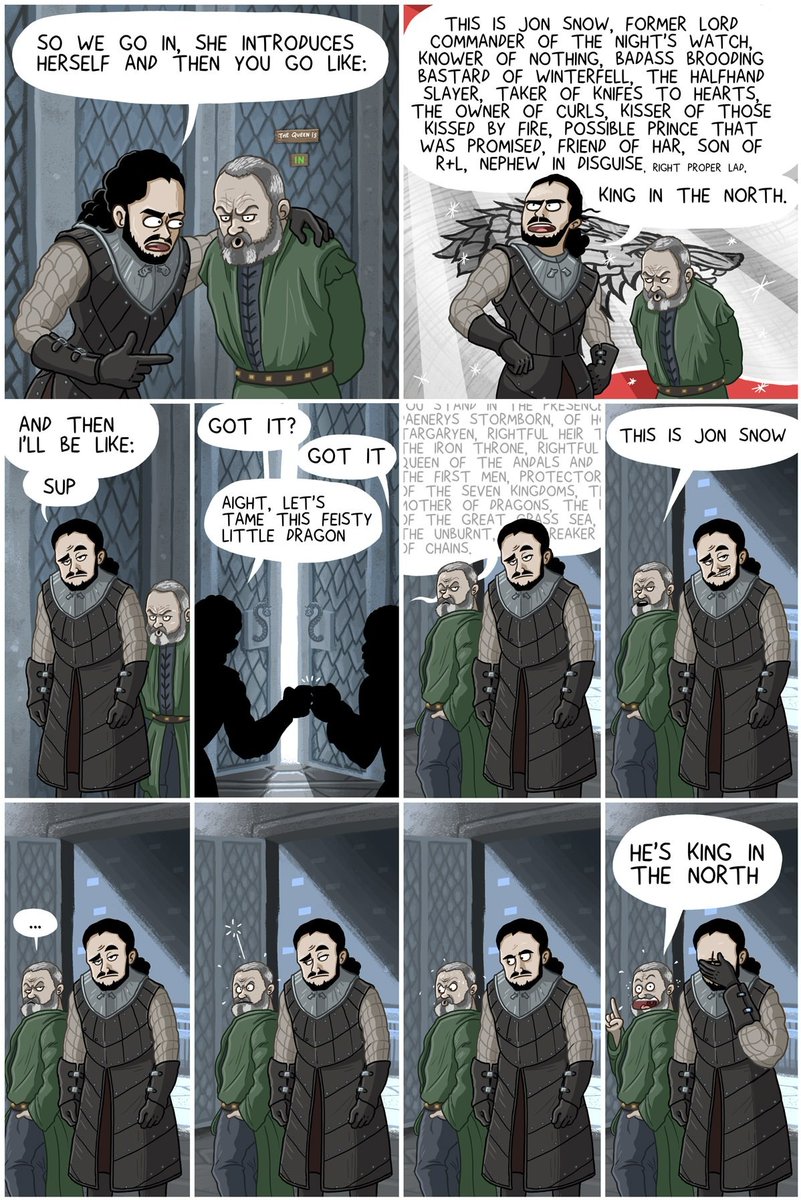 Last edited: Aug 12, 2017
If I didn't focus on the good and fun in life, I'd be seriously bummed out by the state this world is in and has always been in.

Funniest thing is, that i can really imagine that happened in the show.
Last edited: Aug 14, 2017

Another episode where so much happens!!!!

Starting off with the obvious: Jaime's still alive, as is Bronn. Good, not I can enjoy the rest of the episode.

Daenerys tells the surviving Lannister army "I didn't come here to murder anyone...... bend the knee or die!"

She just said she didn't come there to kill anyone! That Queen sure needs a good hand! She's turning into her mad father before our eyes!

Jaime tells Cercei that Daenerys has an army of dorthraki and 3 dragons, and Cercei is like "so?" We have 2 mad queens!

Drogon has a friendly meeting with Jon. Animals are clever, that dragon must feel that Jon is a Targaryen!

Jorah is finally returning to Khaleesi's side.

Only to say goodbye again.

Loved to see Tyrion and Jaime together again. Always loved them. Best Lannisters by far. And my 2 favorite characters on the show. Jaime listened to Tyrion - but will Cercei listen to Jaime? Somehow I think she will appear to, and then do a 180 and unleash hell, Cercei-style. And that evil creature gets a 4th chance to control a child? Disgusting.

Did you see Jaime's face when Cercei told him "don't betray me again"? First happy that he will get another child, an official child this time, and then realize that Cercei the vindictive insane one is the mother. It's like "yay...ey?" He is coming around. Little by little, Jaime is coming around.

Davos had the line of the week when he met up with Gendry: "I thought you were still rowing"

But when did Gendry find out that he's Robert Baratheon's bastard child? I don't remember that.

Littlefinger is creeping me out more and more. What game did he play with Arya? What are his intentions??

The gang heads up to Eastwatch where The Hound and his crew are jailed. So the living decide to work together to capture a dead to send to Cercei, as proof that the while walkers are for real.

The biggest surprise of the episode for me was when Gilly was reading from that book. Did she just read that Prince Rhaegar annulled his marriage and married another woman secretly in Dorne??? Does that mean that Rhaegar married LYANNA STARK aka mother of Jon Snow??? Does this mean that Jon Snow is NOT a bastard child afterall? That he's a true and legal son of Rhaegar and Lyanna. Jon Targaryen. Slap me silly and call me Alfred! I seriously hope Gilly brought the book with her when they left!!!
If I didn't focus on the good and fun in life, I'd be seriously bummed out by the state this world is in and has always been in.

So many tense moments!

I'm glad Jaime and Bronn are alive. The dragon on top of the rock and everyone beneath was such a powerful shot. Such complexity in Daenerys' actions. I don't like what happened with Randyll and Dickon, but I understand it. I had completely forgotten they were Sam's father and brother!

Speaking of Sam, his exit from the citadel was surprising but makes sense.

Cersei's pregnant! Whoa, was that a shocker! Imagine if she gives birth to a dwarf just like Tyrion? And that warning to Jaime not to betray her again....

Gendry! My God, another shocker! My, what a fine, king-like man he's grown up to be. Him walking up to Jon and straight out telling him who he is, and their bonding over being bastards, and sons of best friends was perfect. Beyond perfect.

Of course I cried when Jorah and Dany reunited. Shut up.

That scene where Drogon let Jon pet him was so goddamn beautiful. My heart. And so massively important. Notice how they sneaked in a little bit of history to set it up later on and then it was interrupted....

Littlefinger, that little piece of sh!t, looked so evil as he observed Arya, his plan having worked. Arya and Sansa will have a tough time beating him.

Never in a million years would I have predicted Jon, Davos, Gendry, Hound, Jorah (yay, mention of Commander Mormont!), Tormund (he asked about Brienne!) and Brotherhood all working together. Ever. There's something very right, poetic about Jon back beyond the wall. It feels like it's coming full circle again. It will surely not go well, but boy I can't wait to see it!

JROG said:
Of course I cried when Jorah and Dany reunited. Shut up.
Click to expand...

Visting my parents yesterday I was chatting with my dad about Game of Thrones. My aunt heard part of the conversation and asked about the show we were talking about. When I mentioned the name she got a little excited and said: "Oh, I love game shows, what night and what time is it on?" I then went to explain that it wasn't a game show and she probably wouldn't like it. I mentioned it was violent and medieval, she then went on to say "I like Dragon's Den, I watch that all the time". I didn't have the heart to say anything else.
(Land of the free, land of the free)
There's room for you and for me
​

I have been wondering about the dagger that Littlefinger gave to Bran, who passed it on to Arya. So, I googled it.

Spoiler from the books regarding who tried to kill Bran with the dagger in season 1:

it was Joffrey. Both Tyrion & Jaime (separately) come to this conclusion. The dagger, at the time, belonged to King Robert. Joffrey apparently secretly stole it from his father's room and gave it to the hired assassin to kill Bran. But as that failed, Lady Cat got hold of the dagger and took it south to ask Ned about where it came from. That's how Littlefinger got hold of the dagger.
Wonder how the TV series will handle it.
If I didn't focus on the good and fun in life, I'd be seriously bummed out by the state this world is in and has always been in.