I've just finished watching this documentary which is about the Chicago Bulls basketball team in the 1990s but it focusses heavily on Michael Jordan. Although it's a basketball documentary, it's just as much a documentary about winning, team building, working as a team and leadership. Watching it, I found Michael Jordan to be quite an unpleasant person who was selfish and unsupportive of his colleagues but I guess that's what made him so successful.

I found the most interesting character featured to be Scottie Pippen who was a far more likeable, complex and multi-layered individual than Michael Jordan and I wished there had been a bigger focus on his life and battles. Well worth a watch even if you're not a basketball fan. 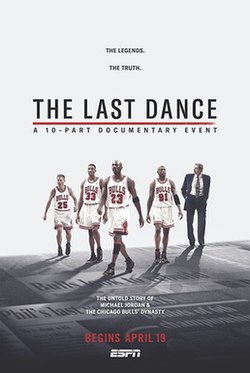 Saying "All Lives Matter" as a response to "Black Lives Matter" is like saying the fire brigade should spray down all houses in a street even though only one is on fire …because all houses matter. Yes, your house matters too, BUT YOUR HOUSE IS NOT ON FIRE!!!
D

I had this recorded for months and finally got around to watching it. I was a huge MJ fan growing up and still am. I gotta say at times watching this he does come off as a little unlike able but it is something everyone should see if ur having trouble motivating urself to do something. He’s the definition of the word leader
You must log in or register to reply here.
Share:
Facebook Twitter Reddit Pinterest Tumblr WhatsApp Email Share Link
Top