Michael Torrance said:
War and Remembrance I did not like as much as Winds of War
Click to expand...

Winds Of War was OK-ish but I didn't really like it. That was the second red flag.

Michael Torrance said:
I used to idolize the original Star Trek series as a kid
Click to expand... 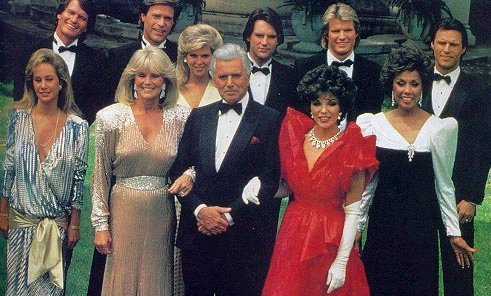 But I know what made me admire season 1, and what made me (as a teen) like the other seasons. I can't for the life of me figure out what I liked in these wacky space vaudeville acts of Kirk and co.

Michael Torrance said:
I can't for the life of me figure out what I liked in these wacky space vaudeville acts of Kirk and co.
Click to expand...

I didn't rate/rank the seasons when I was a child. I just wanted more, more, more. That feeling, those minutes before the episode started - it was such a rush!
That experience doesn't exist anymore, no matter how great the story is. When it's really good I'll binge-watch it, but it's not the same.
C

Anyone else remember “Covenant”, NBC’s umpteenth attempt at a primetime soap? It was about a banking family which had made a deal with the devil for their riches. This never went beyond the pilot and was burned off off-season. But it was so crazy and over-the-top (they had a hellmouth in the basement of their office building), I never forgot it. I found it again on YouTube, and I wish they had done a season of it, just to see what they could do with it.

It's the mansion from DARK MANSIONS!! I'll watch it tomorrow, it looks like a great piece of 80s TV trash.

I've watched it and the good news is that it's not as bad as Dark Mansions. The Covenant dynasty is an interesting idea and I think I would have liked it back in the 80s.
There are similarities with Stephen King's "The Mangler" but overall it was a boring movie with mostly wooden performances.
But it has enough potential to warrant a Netflix remake, imo.
I guess it would be something like 666 Park Avenue.
Last edited: Jul 21, 2019

Knots Landing producers batted around the idea of doing a summer series focused around the younger characters (at the time, that would have been Paige, Michael, Johnny, Olivia, Harold, and maybe Brian). At that point, the producers were frustrated at how the show lost momentum during the summer hiatus, and how the network would not even air the show in reruns. By focusing on the younger (read: less-used) set of characters, they could have gone after a younger demo while also holding onto a lot of regular viewers who might tune in to see the regulars (Lee, Van Ark, etc.) in guest spots. From what was written in the press, this would have been a 'companion' to the regular series, mostly filmed in the Lotus Point settings rather than the cul-de-sac. They never filmed a proper pilot because it was implied that they would do a lot of the setting-up within the main series. It obviously never happened, mostly because of logistics and a Writers' Strike. By the following season, it was not brought up again, likely because they had integrated Paige into the "adult" stories--and other than her, none of the younger set was very interesting.

Well, if that Mexico storyline is anything to go by… But it would be nice to see Brian in all kinds of strange accidents, like, falling off the Lotus Point mini-bridge or getting stuck into a well or eating funny mushrooms, and then the others have to work together to save him.

I know this thread is about primetime soaps that never materialized, but it got me thinking about soaps from the 80s and I was reminded of a late-night soap that CBS attempted on Friday nights in the early part of the decade called "Behind The Screen." It was created by David Jacobs and starred Janine Turner (prior to GH), Michael Sabatino (prior to KL), Mel Ferrer (prior to FC) and a few others. Michele Lee played herself in a cameo in one episode.

I had forgotten most of the details of the show until I read the Wiki page. At the time, I thought it was pretty decent. 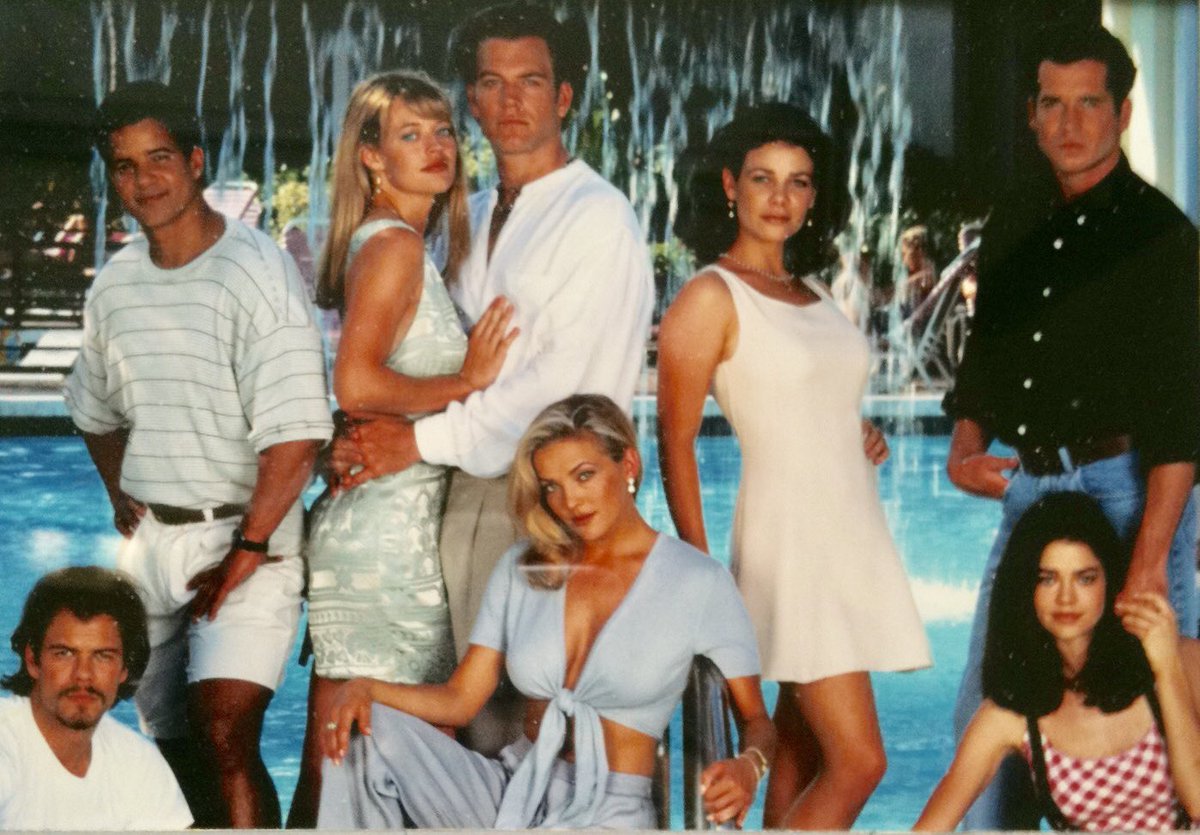 Did anyone see this when it aired as a TV movie? It was an Aaron Spelling pilot called Pier 66 that was set in Fort Lauderdale (the show's original title) and was being touted as "Melrose Place in a marina". It starred Jeri Ryan, Denise Richards and Michael Weatherly. ABC didn't pick it up and Spelling hoped to sell it elsewhere but it only ended up being shown as a one off movie in 1996.

I came across a clip of this on Instagram this week. Released in 1964 as a TV movie called Della, it was actually the pilot for a proposed soap called Royal Bay. The show, set in an affluent coastal town, would follow the four Stafford brothers and their lives in the titular seaside community. The pilot mainly revolved around Barney Stafford (Paul Burke) who becomes entangled in the life of reclusive town matriarch Della Chapell (Joan Crawford) during a land deal. While Crawford (who also served as a producer) featured prominently in the pilot, the plan was to have her drop in every so often as a guest star if the series had been picked up.
A

Did anyone see this when it aired as a TV movie? It was an Aaron Spelling pilot called Pier 66 that was set in Fort Lauderdale (the show's original title) and was being touted as "Melrose Place in a marina". It starred Jeri Ryan, Denise Richards and Michael Weatherly. ABC didn't pick it up and Spelling hoped to sell it elsewhere but it only ended up being shown as a one off movie in 1996.

Jeri Ryan joined the cast of Dark Skies a year later, when that show underwent a desperate retooling to boost flagging ratings. (Had that show still ran, it was planned by it's creators to be 5 seasons in different decades ending with a 2 hour finale on 31st December 1999)
A

Willie Oleson said:
There's something about the description in the NYT article that reminds me of Emerald Point N.A.S.: it wants to be a Big Soap but they can't come up with a good reason (or excuse).
At least The Colbys could be described as "expanding the Dynasty universe".
Not that there's anything wrong with a soap-for-the-heck-of-it, and I probably would have watched and enjoyed the Midas Valley soap....although...microchips? Catherine Mary Stewart? It doesn't strike me as must-see TV.

Cruel Intentions as a series? I guess that would have been something like REVENGE?
Click to expand...

The Midas Valley one may have worked if they had Christopher Walken in it, given the plot of his Bond film. (And Julie Rogers from Charlie's Angels was in it).
A 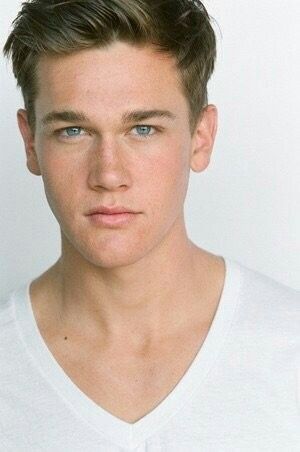 Coby Bell, Peter Gallagher and Duane Henry rounded out the rest of the male cast while Nathalie "Cristal #1" Kelley played the assistant and lover of Sarah Michelle Gellar's Kathryn.
Click to expand...

Just looked up Taylor John Smith, and he does look good.

Carrie Fairchild said:
it was actually the pilot for a proposed soap called Royal Bay.
Click to expand...

Hunks, bitches and mansions - bring it on!
Some parts of the interior remind me of Barbara Stanwyck's the Barkley Ranch.

Willie Oleson said:
Some parts of the interior remind me of Barbara Stanwyck's the Barkley Ranch.
Click to expand...