Crap! I really didn't want to see Cliff against Val!

The first vote can be the deciding factor so I better hurry up.

1. Krystle Carrington (I want to keep Dynasty in the game for as long as possible)
2. Valene Ewing (because Dallas still has 4 players, and Knots only 3)

Willie Oleson said:
so I better hurry up
Click to expand...

OK, in essence that doesn't change anything, but since we posted at exactly the same time, my post (CET) really is the first post.

Haha, but it's the kind of argument they'd use on THE GOOD WIFE

Match Seven
Well, it's like against like. Both their respective series' truth speakers who started off grounded but became a little more pious with each passing year. Match Eight has dictated who gets my vote here, but if I were to justify my choice it would be because Karen's piety was more overwrought than Krystle's and was enabled by her husband, making Karen one half of the Circle's own omniscient duo. Thinking of Karen watching those home movies makes me want to change my mind, but as I've vowed not to abstain it's time for the rose-tinted spectacles to come off and the plates to fly...
Krystle Carrington

Match Eight
Like Ome, I was hoping it wouldn't be between these two as I have a soft spot for both. They're both interesting characters, but Val was at the centre of some of Knots's most powerful stories and I feel she fulfilled her dramatic potential more due to being better written. So it's...
Valene Ewing 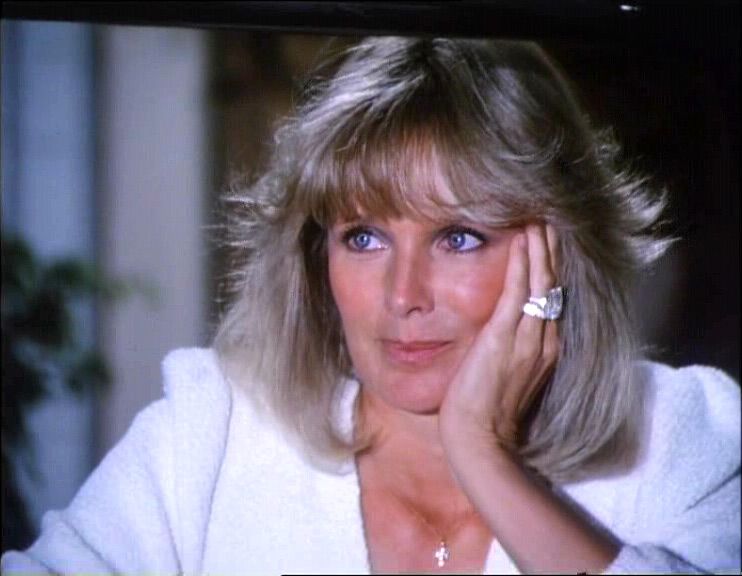 Match 7 - Krystle Carrington: Match 8 is a no brainer for me, so Karen was unfortunately sacrificed in this match to allow Val's victory over Cliff. Not that I'm not a Krystle fan. She was great in her early seasons and even when she became a whingey wet rag as time progressed, she still had her moments.

Match 8 - Val Ewing: Cliff is a bit of a nonentity in my mind. When I remember Dallas, he's somewhere near the bottom of the pile of characters I recall fondly, with even the likes of Jenna and Jamie making more of an impression on me. What can I say, it seems to be the ladies of Dallas (and most other soaps) that made the biggest impression on me. Which brings us to Val. As I've said earlier, the Val's babies arc is one of my favourite storylines ever and while she eventually became "Poor Val", she really didn't take any sh*t from self pitying Gary and scheming Abby early on.

so easy round for me

Match 7: Karen
Match 8: Cliff
If I didn't focus on the good and fun in life, I'd be seriously bummed out by the state this world is in and has always been in.

Barbara Fan said:
Still could never vote (or watch) Linda Evans if you paid me
Click to expand...

Match 7 - I can't stand Krystle. Just everything about her was annoying from that whispery voice, the hairdo that looked like a pair of theatre curtains, to her insipid, whiney personality. Linda Evans limitations as an actress meant the character was never elevated into someone more interesting and she just slummed around in the world of bland. I used to say the only thing worse than Krystle was two Krystles and then my worst soap nightmare came true in season 6 when the arrival of Rita meant we were subjected to two badly acted versions of Krystle. Argh!!

All the 80s prime time soaps had a key character that drove many storylines, not just the ones in which they played a major part. In Dallas it was JR, Falcon Crest had Angela and for me that person was Karen in Knots Landing. Easy choice to for me, my winner is Karen MacKenzie.

Both characters became mere caricatures as the show went on (Krystle, especially) but they were invaluable in the early seasons (Krystle was the reason for DYNASTY in season 1).

This match is difficult for me since I don't want to chose between Valene and Karen. I love both characters. I love Cliff too and didn't want to see him vs. Valene. But I have to vote for my most favorite character out of the four so my vote goes to:

1. Valene
The journey this woman made on the show was amazing. Valene started out as a country girl with a thick accent and pony tails. She was very much like a little girl in the beginning who still had deep wounds from her past. She missed her mother. She missed her daughter and she loved Gary so much that she would accept bad behavior from him just to keep him. Then we saw her go on a journey where she grew stronger for each season that passed by. She forgave Lilimae and the two of them formed a mother-daughter relationship that they had been missing. Then Lilimae left and Valene became independent. She found success as a writer and yet she always put her children first. Her relationship with Gary remained complicated and had it's ups and downs but in the end love prevailed.

I have decided not to vote in the first match since I far prefer Karen over Krystle so I won't vote against her.

Karin Schill said:
I have decided not to vote in the first match since I far prefer Karen over Krystle so I won't vote against her
Click to expand...