Oh, how I wish Corday/Sony would start putting up classic DAYS episodes on Peacock.

I'm guessing a lot more of the pre-1980 stuff is out there for Days, even if it might be incomplete. NBC/Corday sold Days into syndication in Australia early on, though I can't recall just how early (the show began in 1965). They would have prepared broadcast-quality tapes to send to Australia, and the Aussie network airing it would have perhaps done a better job holding on to those tapes than the US networks did (since US networks re-recorded new episodes over the old ones, using the tape over and over). But like I said it might be stray episodes or parts of episodes rather than a significant "run" of consecutive episodes, which is what a programmer would want if they planned to rerun them.

Daniel Avery said:
I'm guessing a lot more of the pre-1980 stuff is out there for Days, even if it might be incomplete. NBC/Corday sold Days into syndication in Australia early on, though I can't recall just how early (the show began in 1965). They would have prepared broadcast-quality tapes to send to Australia, and the Aussie network airing it would have perhaps done a better job holding on to those tapes than the US networks did (since US networks re-recorded new episodes over the old ones, using the tape over and over). But like I said it might be stray episodes or parts of episodes rather than a significant "run" of consecutive episodes, which is what a programmer would want if they planned to rerun them.
Click to expand...

My understanding is that there's a complete run of DAYS - it was even raised as an issue for in Corday's recent lawsuit against Sony that they wouldn't allow him to sell earlier seasons of DAYS pre-2015 or so. I imagine since it's always been co-produced by Corday Productions they might've made sure to keep all those tapes better than a huge company like Sony/Columbia would. It's the same for Y&R iirc.

It was definitely the case for Ryan's Hope (tapes kept by the show's co-creators and writers), Dark Shadows (tapes kept by Dan Curtis Productions), and The Doctors (most tapes kept by Colgate-Palmolive, the producer and lead sponsor). I'm not sure about Y&R, but I would not be surprised, since Bill Bell was one smart cookie.

Thanks for posting. I really would like to see the first 15-20 years. I’m very intrigued by those storylines.

A whole bunch of 60s episodes plus some 70s episodes were uploaded - I've created a playlist in airing order here: https://www.youtube.com/playlist?list=PLZ5NXpr_PzNjvtUPu9kC2JSJ2QRWG4zMW

I expect them to be nuked pretty soon to be honest. The channel has also uploaded tonnes of old soap episodes of Guiding Light, As The World Turns, some Search for Tomorrow... it's definitively not going to be up for long.
Last edited: May 31, 2020

Many moons ago AOL put up a bunch of Procter and Gamble soaps for 'legitimate' viewing (that is, P&G brokered a deal). It was very early on (obviously--AOL?!) but they were probably the source of these episodes you mention. Not sure how they managed to make copies, since the technology wasn't what it is today. I do recall AOL was airing stuff from late-1970s and early-1980s, and it was for their subscribers only, of course.

In the late 1980s P&G sold the final five years of Edge of Night and Search for Tomorrow to the USA Network, who aired the episodes in a late-evening slot. Since they aired on 'regular TV' it was very easy to tape the episodes, so those are all over youtube (especially the EON reruns). P&G sold reruns of Another World to SoapNet at one point but SN failed to hold up their end of the deal (which was to air the entire run from 1987 onwards; they stopped around the time of the 1992 episodes), so perhaps that made P&G reluctant to sign any more license deals.

Sometimes I think it's best we don't get what we want. I mean if there was a network or online service that was just showing all these classic soaps. I'd just quit my job and go on unemployment benefit and put on 900 lbs.

During the period that SoapNet was showing my precious Another World (as well as Knots Landing) my cable company would not carry SoapNet. Within six months of the channel ditching those shows, guess what ended up on Channel 120?

Thanks for the heads up @tommie . This has been a treat and I appreciate your playlist. I've been going through the episodes as fast as I can before Sony takes them all down. I'm up to Feb. 1966. Looking forward to the arrival of Susan, as she's a character I've read a lot about but haven't ever seen.
​

Daniel Avery said:
It was very early on (obviously--AOL?!) but they were probably the source of these episodes you mention.
Click to expand...

Those old AOL episodes aren't the source of a lot of the episodes this user has uploaded. I'm very curious where these full episodes of Days came from. What a treasure trove. There are even GL episodes from the 50's and ATWT from the 60's -- all much further back than any of the AOL episodes ever went. (Was ATWT one of the series that AOL put up? I only remember AW and Texas.)
Last edited: Jun 1, 2020
​

Going by from what I've watched the 60s episodes are from kinoscopes, probably from some old fans collection that's been traded over the years. It seems to be very specific weeks as far as I've seen - ie the first week of DAYS (except for the first two episodes that aired on Soapnet), the week/episodes that Tony broke up with Marie, leading her to attempt suicide and Tom staying at home and which lead to a patient dying and him being sued for malpractice, which lead to the trial week in in January '66. It's very much grouped together so I think it's from private trading over the years. It's very much a treat and not as disjointed as I thought it would be.

It's interesting to see how big of a part Marie was on these 60s episodes considering she's more or less forgotten now.

Ooh, Julie keeps mentioning David Martin. Another family that was important on the show that just disappeared.

Jason73 said:
Those old AOL episodes aren't the source of a lot of the episodes this user has uploaded.
Click to expand...

Oh, you're right...Days isn't even a P&G soap, obviously. It's just that whenever I hear "watch them quick before they're taken down," my brain automatically goes to P&G and their jealous and sometimes litigious guarding of their soap properties.

Francis Reid is so compelling in these 60's episodes. Even as a supporting character she lights up the screen. She has such screen presence.
​

Wow, the Julie/David/Susan triangle moved fast. Early March and Susan isn't even around yet and then in August Susan and David are married. It's such a juicy triangle from what I've read. I wish there was more of it available to watch. One episode of Susan and I love her already. I want more. Denise Alexander is terrific.
​

I had never seen Denise Alexander in anything (not Days, not even GH when she played Lesley Webber) when she was hired by Another World to play mysterious "Marissa LaSalle," the wife of Reginald Love. Yet I can recall from the day she arrived on the show, I felt like I knew her. I instantly felt drawn to her and her character, despite the issue of her being married to the evil Reginald. She just radiates likeability and empathy. I don't know how she does it, but Denise Alexander became one of my favorite soap actresses in short order.

And just like that, all the Days episodes are gone . . . I had about three of the 60's episodes left, presumably all about Susan and David and Julie. I can't stand Sony.

Susan, from the tiny bit I've seen is an interesting character. She gets pregnant by David and is pissed that she's pregnant. She gets sort of railroaded into marrying David who she knows is in love with Julie and she's pissed about being pregnant and trapped in a loveless marriage and Denise managed, (in the two or three episodes that I saw) to imbue Susan with a combination of bitchiness and empathy. At least in the few episodes I saw, I felt for her even though she is the spoiler, though maybe that's just because I like Denise so much. I'd love to see when she goes off the deep end and shoots David and stands trial for that. The Julie-Susan rivalry is epic. They fight over David and then Scott and then Doug. 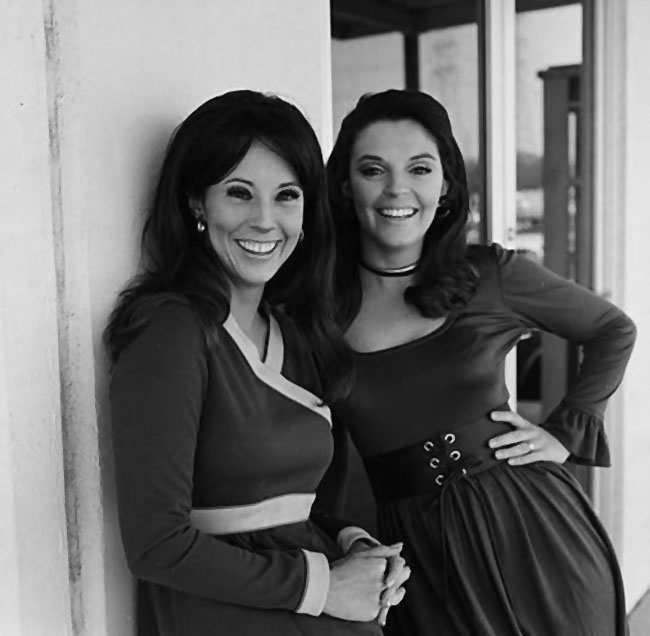 Denise's husband in real life is on the show too during this time frame--playing a character named Tony who is in love with Marie. They must have met on Days, and from what I can tell, they are still married.
Last edited: Jun 3, 2020
​

I used to have three episodes of Days on YouTube from 1996. They would flag parts of episodes to remove, and by the time I went on there to delete the other clips,the three that had been flagged were active again. To keep Sony from flagging the whole channel I just deleted all of my Days clips

I copied some AW episodes from YouTube when they were online for that period after soapNet dropped the show. Aside from the Christmas episode in 1991, the only other episode I managed to watch I think was someone playing tennis against someone in a wheelchair. Sam Fowler or Dennis Wheeler. Everyone seemed to be blonde in 1992. I remember watching Falcon Crest on the AOL site and sometimes it would get stuck on a commercial and never come back