Michael Torrance said:
More than likely. With his real name (Donald Feinberg) he could only run for a house seat--the senate if in the Dakotas.

Edited: FYI, Don Diamont was the first daytime actor to be named among PEOPLE's sexiest men of the year in 1990.
Click to expand...

He appeared in a random scene with Brenda Dickson as Jill and I didn't recognise him. He was stunningly attractive. I didn't know who the character was. As soon as she said his name I had to google The Young And The Restless Brad 1985. I couldn't believe it was him! Then I looked at him a bit more and got pregnant.

Staff Member
The way I remember it, Brad Carlton was hired by Jill Abbott to be the eye-candy gardener/pool boy at the Abbott estate. He gave her what she seemed to want, strutting around shirtless and offering to apply her suntan lotion, etc. but I don't think she ever seduced him. He was ambitious, though, eventually going to work at Jabot and romancing/marrying Traci (who, more than anyone, deserved to be swept off her feet by a drop-dead gorgeous hunk who genuinely cared for her). Jill of course ruined her marriage to John, got herself recast and went on with her life. In true soap fashion Brad also became involved with Ashley, but the Brad/Traci thing was one of my favorite Y&R stories.

Prior to being cast on Y&R, he had played a shady character named Carlo Forenza on Days of Our Lives who was basically there to look hot and break up Liz and Neil's marriage...not necessarily in that order.

Can we talk about Brenda Dickson? I think I remember discussing her before on the old forum, but now I don't remember? How did it all go wrong? Wasn't she really well liked as Jill? And wasn't her stuff with Kay all pretty good? Why was she sacked when she was at her peak?

Staff Member
Brenda Dickson, as we say in the South, got too big for her britches. She was popular as Jill, but I think she and her handlers (agent, publicist, whatever) built her ego up and led her to think that she WAS the show. As good as Bill Bell was at promoting a family atmosphere on set, he did not suffer fools gladly. When Dickson started pulling various diva moves (she would show up late to tapings, feign various illnesses that would clear up as quickly as they started) the writing was on the wall. Holding up taping was and still is the big taboo of soaps. I can't recall the exact blow-by-blow accounts, but she was fired, recast, and then returned briefly (I think) but left again because she had not really learned her lesson or gotten the message that she was NOT indispensable. I recall that for years afterward she would complain to anyone who would listen about how she was wronged, that she was not some nutty, self-involved diva. She had made Y&R the hit that it was and they just tossed her aside! After a while she sort of proved all the stories right by continuing to behave like some nutty, self-involved diva. She never had another major acting gig I can remember (probably some guest-star work?). And of course there was that iconic (but not in a good way) home video she made called "Welcome to My Home" (or something like that) where she gave a tour of her home as if she was an ersatz Alexis Carrington. She was either quite delusional, or trying her hand at comedy, but it just comes across as bat-$hit crazy.

Her stuff with Jeanne Cooper was indeed excellent. She turned out a lot of good work on Y&R. But she was her own worst enemy.

I remember years ago there was talk of her writing/releasing a book where she was going to call the Bell family a mafia and that Bill had blacklisted her and all sorts of stuff. I don't know if she ever did write a book? Last I remember was a brief while were she was popping up at things online looking like she was drunk or high or both.
And there was a great version of Welcome to My Home, on YouTube for years where someone had dubbed over her and just talked nonsense. Whoever did that really did a good impersonation of her.
I wonder did The Eyes Have It come first?

Staff Member
E! True Hollywood Story did an episode on Y&R and since this BD stuff was their bread-and-butter back then, they basically just set up cameras and let her spout off without any kind of prompting or (God forbid) reality checks.

Daniel Avery said:
E! True Hollywood Story did an episode on Y&R and since this BD stuff was their bread-and-butter back then, they basically just set up cameras and let her spout off without any kind of prompting or (God forbid) reality checks.
Click to expand...

Oh I would love to see that!

Staff Member
They were hurting for salacious material. Other than the Eric Braeden/Peter Bergman tussle in the dressing room, Brenda's dismissal was the only major scandal they could dig up. Of course it was produced in the mid-1990s, so other goodies have happened since.

Daniel Avery said:
They were hurting for salacious material. Other than the Eric Braeden/Peter Bergman tussle in the dressing room, Brenda's dismissal was the only major scandal they could dig up. Of course it was produced in the mid-1990s, so other goodies have happened since.
Click to expand...

I went to look for that E True Hollywood Story and found this! 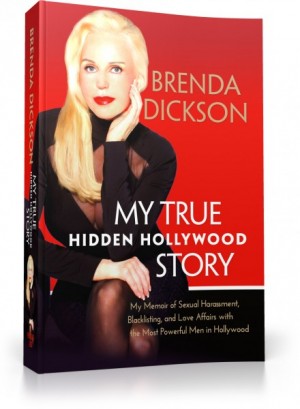 Staff Member
I'll bet her ghost-writer had to go into therapy afterwards. Unless she wrote it herself, which would mean it reads like the manifesto of the Unabomber.

The description on Amazon: 351 pages but 70 of them are color photos. I think I read most of her ramblings online years ago. It's too bad she had all the Welcome to my Home clips pulled from YouTube because they were comedy gold
Last edited: Jun 15, 2020

Back in 1n 1987 Ridge has made a pass at Brooke and she rebuked him, even though she does fancy him. They met at a bar and Ridge asked her back to his place for a swim... Yes, really. She told him she didn't have a swim suit, and he told her that they had suits at his place for guests. Fancy rich people do that ya know. So she goes
Click to expand...

I remember seeing that on Dawson's Creek one time. The rich guy at school was like, we should cram for the big test at my place, there are swimsuits for everyone. I guess everyone in glamorous TV land. But swimsuits for every possible body type?


he reason he made the pass at Brooke is because Caroline hasn't slept with him because she wants to save it for marriage. Is this even really a thing in America? Or do ya'll just pretend? Seems weird as f**k for rich people in Los Angles, but Hey ho.... There ya go.
Click to expand...

I think that was the big difference between daytime and primetime. Like where Fallon just had sex with everybody, daytime moves at a glacial pace, and some female characters just wanted to wait for a man to actually be in love with them before they had sex. Like the famous Days couple, Steve and Kayla, it took like two years for them to make love the first time. Times have changed though, so eventually you had characters who loathed each other ripping clothes off and going at it
Last edited: Jun 15, 2020

Staff Member
Caroline abstaining from premarital sex was more of a plot device than anything. I mean, virginal Caroline and horn-dog Ridge? The jokes write themselves. But the viewer knew immediately what their main stumbling block would be, and it put even more of a spotlight on how 'them rick folks ain't like us,' with these rich, "fast" Forrester men bedding women left and right while good girls like Caroline hold fast to tradition.

Let's face facts here: Ridge Forrester only invited selected 'body types' back to "swim" with him. Speaking of that pool, Drs. Birx and Fauci would have declared a national emergency after taking samples from that STD factory.

I love that pool set. Especially when Thorn needs a swim.

Daniel Avery said:
Let's face facts here: Ridge Forrester only invited selected 'body types' back to "swim" with him. Speaking of that pool, Drs. Birx and Fauci would have declared a national emergency after taking samples from that STD factory.
Click to expand...

Disgusting but true. I think during one of their numerous weddings the minister claimed that Brooke used to cut photos of Ridge out of the newspaper and put them in her scrapbook at church camp


Alexis said:
I love that pool set. Especially when Thorn needs a swim.
Click to expand...

That pool was definitely for the kids. I just don't see Stephanie lounging in the sun while the maid brings tea