...but that's not the correct Miss Ellie.

Archive of Our Own
Fanfiction

The polls have now closed and the votes have been counted and verified. The results of the first 2 matches of round 2 of The World Cup of Soap Operas are as follows:

The 2 shows going through to the quarter finals are confirmed as Dallas and Neighbours. So we reach for the remote control to switch off Sons and Daughters and Howards' Way. The soaps remaining in the contest are as follows:

The next 2 matches in the second round of the contest are as follows: The poll is now open for you to choose which soaps you would like to win each of the two matches to go through to the next round. You may vote for a winner of either match or for both matches.

Stating the reasons for your choices is encouraged as this makes the contest more interesting and may help others in their decisions. However, this is entirely optional and you can just state your chosen winner of each match if you prefer.


Match 4 = Brookside
It's my favourite moment in TV back when I watched an episode where Petra woke up to find her husband dead by her side. I was never a fan of the soaps back then, however that instant changed everything and nothing prepared me for what was to come of those wonderful characters living on a cul-de-sac.
(Land of the free, land of the free)
There's room for you and for me
​

Goodness, I'm not sure about any of them but Brookside, so I'll go with:

Match 1: Peyton Place - simply because I believe it's a classic

Match 2: Brookside - loved a bit of Brookie when it was on. Especially the storyline where Trevor ended up under the patio.

This week is all for places:

Match 4: Melrose Place
If I didn't focus on the good and fun in life, I'd be seriously bummed out by the state this world is in and has always been in.

Match 4: Hmm….let's say...Melrose Place. Because I could watch it without subtitles.

I have never watched any of the 4 shows

3. Peyton Place as my mum liked it

4. Brookside - as it had wonderful Sue Johnson and my friend Gail danced with "Billy Corkhill" at a wedding in the 80s

Match 3) RETURN TO EDEN - I've never seen either show but I've heard nothing but good things about RTE which is on my to watch list at some point in the future so, the Aussie soap has it.

Match 3 - I really liked Return To Eden when it was first screened during the 1980 and was totally gripped by it. Fascinating characters, outlandish plots, great twists, surprises and cliffhangers and very different from anything else on TV at the time. However, Peyton Place is the mummy and daddy of prime time soap opera and practically invented the genre. I've only watched a few episodes and it's easy to see how it was so popular in the 1960s. So my vote goes to Peyton Place.

Peyton Place is the original American prime time soap, without which we may not have had Dallas, Knots, Dynasty and, in turn, Return To Eden. Peyton Place captivated me when I watched the entire run in the early Nineties, and when the DVDs came out it was the most pleasant of surprises to find that it’s not only stood the test of time incredibly well, it’s far better than I remembered. Dark, emotive and almost painfully gorgeous.

Return To Eden was a favourite of mine in the Eighties - first the gritty mini-series and then the glossy series. It had a wonderful cast and an enjoyably Australian tone, complete with crocs and snakes. When RTE was released on DVD, I discovered that it hadn’t held up quite as well and the appeal these days is entirely nostalgia-based.

For being so well-made, I’m voting…
Peyton Place

Melrose Place was another Nineties favourite of mine. I stuck with it for most of its humble beginnings, then drifted away, before returning to the series with the classic episode in which Kimberly returned from the dead, at which point it became an obsession for several years. It had some heart pounding cliffhangers - sometimes on a weekly basis. I got burnout by Season Five and have never felt the need to watch the final two seasons because everything had been (over)done. I’ve enjoyed revisiting the series on DVD, but found I can only watch in small doses because the fast pace, flat lighting and wailing guitars can all get a bit too much.

My introduction to Brookside was watching the siege of 1985 with a friend who was into the series. I watched a few more, drifted away and then returned the following year to watch on a full-time basis for the best part of the next decade. I was just the right demographic for the spin-off bubbles like Damon & Debbie, and I also appreciated the grittiness and reality of the series. I finally caught up with the early days of the series when it was repeated in the Nineties, the timing of which highlighted how poor the new episodes were in comparison. It was never meant to be a mainstream soap with bodies under patios and headline-seeking lesbian kisses, even though that’s how it ended up. Like Melrose, Brookie lost me towards the end, and the Jimmy Corkhill era remains a turn off for me. But the greatness of its early years and its rebellious, politicised, Channel 4 Eightiesness is not to be underestimated.

For being entertaining and challenging, my vote goes to…
Brookside 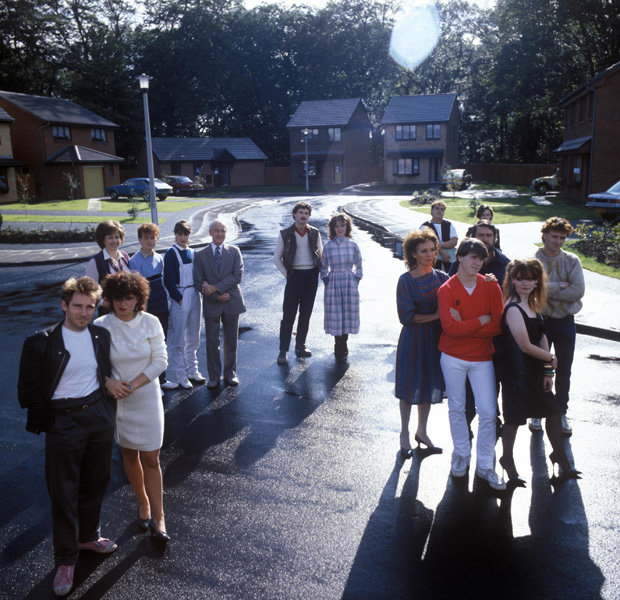