Crimson said:
My interest in Old Hollywood hits its limit with the advent of sound. I have seen only a handful of Silent films, and regard them as little more than curiosities.

I have seen only snippets of Gish, Bow, Pickford and Bara and can't say I found any of them particularly intriguing. Bara in particular is a curious reminder of how much beauty standards have changed in the past 100 years. Even without the vamp-y makeup, she's pretty, uhhh, average by contemporary standards.
Click to expand...

I have to wonder how so many of these silent film stars felt when sound finally became a possibility in movies. I would imagine that many of them had to feel quite regretful over what they had missed out on in their day. I just can’t imagine going to see movies on a regular basis with no sound and perhaps never knowing what ur favorite stars even sounded like. But I guess it left a lot to the imagination.

I find Silent films to be a tough slog. Some of the horror films (NOSFERATU) and comedies (Keaton) are interesting, but I still have limited enthusiam. Mostly, I find the acting hard to get past. I mean, it's basically watching people play charades.

Crimson said:
I find Silent films to be a tough slog
Click to expand...

Agreed! I find them very tough to watch myself. I understand that back then they didn’t have the luxury of comparing it to anything else like we can now but trying to watch them seems like such a chore.

honestly i haven't really seen any Mary Pickford films but her life was really amazing the Talent that she did , she was one of the first i think female directors i think she wrote some of her films as well. plus she co-created United Artists with Charles Chaplin & Douglas Fairbanks i think Jr? i think there was one more but i can't remember who he was. that was Originally to help filmmakers who wanted to make it big if i recall able to get a budget and a chance at the big shots if i recall that was how it was started i doubt it's still like that but i have no idea. i think they all ended up at some point late in life selling their shares but than i could be wrong

i love Silent films but to be fair it depends on the film and the music as well i've bad silent films but than you watch a film like The Unknown (1927) with Lon Chaney Jr. and a young Joan Crawford her first big role i think? it's her best silent i think too and that film is freaking amazing. i'm a huge Lon Chaney film and it breaks my heart so many of his films are still lost. he was the best make-up man ever to grace the screen and ever will i think. Rick Baker is i think #2 and Lon Chaney Jr. actually was trained in doing makeup and wanted to do it just like his father but his father apparently i think had trademark his work and he was unable to do it even though his father taught him. cause at first Jr did not want to be an actor than he changed his mind and used his real name Creigton Hale Jr. i think sorry for the bad spelling of his last name.

and he did get work but it did nothing to his career he wanted to make it on his own than was talked into using his father's name so as you know that's what name he made it big on.

Dolores Gray had a voice described as "a freight-train slathered in honey". The daughter of vaudeville performers, she grew up in the mean streets of Chicago where she was shot in the chest in her early teens, the bullet was never removed but apparently never hindered her ability to sing. Her mother, who soon earned a reputation as an overbearing stage mother, recognized Dolores' talent and the two moved to Hollywood. Dolores was soon "discovered" by Rudy Valee who frequently featured the teenager on his show.

Dolores made uncredited appearances in Lady For A Night and Mr. Skeffington. At 21 she had her own radio program. She then headed to Broadway to pursue roles in musicals. Dolores was Ethel Merman's understudy for the Irving Berlin musical Annie Get Your Gun but when it came time to cast the London production, producers Richard Rodgers and Oscar Hammerstein thought Dolores was ill-suited. Mary Martin urged Rodgers and Hammerstein to let Dolores audition a second time; she won them over and was cast in the role which she played for three years. While in London, Dolores attended the Royal Academy of Dramatic Arts. Dolores continued to perform in the West End and on Broadway before returning to Hollywood in the mid 1950s.

In 1955 Dolores played smarmily insincere TV host Madeline in It's Always Fair Weather. The movie was originally intended to be a sequel to On The Town but was retooled when MGM head Dore Shary refused to hire Frank Sinatra and Jules Munshin to recreate their On The Town roles. Despite Gene Kelly (who co-directed with Stanley Donen) and Cyd Charisse performing some of their best dance numbers the film didn't do well at the box office, possibly due to its downbeat subject matter: three former G.I.s are reunited ten years after the war only to discover they have little in common. I think Dolores is the best part of the movie.

Kismet was also released in 1955, Dolores costarred with Howard Keel and Ann Blyth. Kismet lost money at the box office which gave Dore Shary another reason to oppose the production of more musicals. Sorry the picture quality is poor, at least the sound is good.

Stanley Donen, pleased with Dolores' performance in It's Always Fair Weather, offered her the role of Maggie, the Diana Vreeland inspired magazine editor in Funny Face with Audrey Hepburn and Fred Astaire but Dolores turned him down in favor of a larger role: Sylvia in The Opposite Sex. The Opposite Sex is MGM's 1956 technicolor remake of 1939's The Women with the addition of male cast members (including a very young Leslie Nielsen). The movie (also under Dore Shary's reign at MGM) can't seem to make up its mind whether or not its a musical. Grace Kelly (who left Hollywood for Monaco prior to production), Esther Williams and Eleanor Parker were all offered the lead role (with Williams going on suspension and ultimately leaving MGM out of opposition to being cast) before June Allyson was cast. June Allyson (lip-synching in at least one instance) is given some of the main song & dance numbers while Dolores, a much better singer, only sings the title song over the credits. Ann Miller is in the cast but doesn't perform in any of the musical numbers! Rosalind Russell was uncomfortable playing a bitch in The Women and was encouraged by director George Cukor to play Sylvia broadly, for laughs. Dolores' Sylvia bears her "Jungle Red" claws making her the film's real antagonist, reducing Joan Collins' Crystal (played by Joan Crawford in The Women) to a mere conniving opportunist. Despite a cast that also included Ann Sheridan, Agnes Moorehead, Joan Blondell with Carolyn Jones and Juanita Moore in bit parts The Opposite Sex was yet another musical that lost money for MGM. This is the movie where June Allyson didn't pull her slap but instead hit Joan Collins hard enough to knock off her earring and (according to Collins) cause ringing in her ears.

Dolores' last film was 1957's Designing Woman with Lauren Bacall and Gregory Peck. Bacall is a fashion designer wed to sports writer Peck. Dolores plays Peck's old flame, an entertainer for whom Bacall is hired to design costumes. Despite not being a musical Dolores' character is seen in a dress rehearsal for a TV show. Sorry for poor picture quality, again, but this also sounds good.

In addition to appearing on several cast recordings and a few soundtracks (she sings Marilyn Monroe's part on the soundtrack to There's No Business Like Show Business) Dolores released several songs as singles. Unfortunately, like Rosemary Clooney at the time, Dolores was given many cutesy novelty songs. Dolores recorded one full-length album, Warm Brandy; instead of her signature belting Dolores coos and purrs her way through an assortment of romantic ballads.
https://www.youtube.com/watch?v=r63kcLbUSIE

Dolores appeared on several TV variety shows like The Bell Telephone Hour throughout the 50s before returning to Broadway and London's West End where her career thrived. Dolores won a Best Lead Actress in a Musical Tony for her lead role in Carnival In Flanders despite the show closing after only six performances. In Carnival In Flanders Dolores introduced what would become her signature song: "Here's That Rainy Day". Unfortunately there's no cast recording, this is a 1977 TV performance. 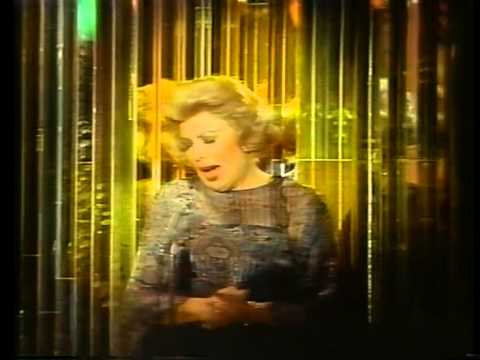 Dolores Gray, who introduced "Here's That Rainy Day" in the short-lived 1953 Broadway musical "Carnival in Flanders," recreates it in this rare 1977 TV appea...

Dolores performed until 1988 appearing on stage in Destry Rides Again, Gypsy, 42nd Street and Follies among others. One of Dolores' last performances was in a 1988 episode of Dr. Who's Silver Nemesis serial. Here's a performance of "I'm Still Here" from Follies taped for television in 1987: 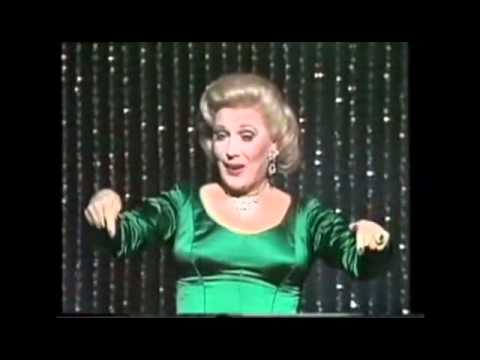 Dolores later donated her musical arrangements from some of her live shows to the Library of Congress. Performer John Epperson has said he based his drag character Lipsynka largely on Dolores; the two met in 1995 and Dolores saw Lipsynka off-Broadway, she was very flattered and entertained. Dolores passed away of heart disease in 2002 at the age of 78.

okay i admit i have no idea who she is

Grant Jennings said:
Dolores Gray had a voice described as "a freight-train slathered in honey".
Click to expand...

I only know her from the musical THE OPPOSITE SEX, which ...


Grant Jennings said:
The movie (also under Dore Shary's reign at MGM) can't seem to make up its mind whether or not its a musical.
Click to expand...

is one of the worst movies of the decade. Remakes are rarely as good as the originals, but there's a special cinematic purgatory reserved those garish, overproduced, Technicolored remakes of earlier, better, B&W comedies. Classics ranging from IT HAPPENED ONE NIGHT, BALL OF FIRE, LIBELED LADY to THE PHILADELPHIA STORY got that treatment. None of these remakes are particularly good, but the remake of THE WOMEN is dismal.

One of the oddities of these remakes is how great stars were replaced by mediocre ones*. Myrna Loy being replaced by Esther Williams? Virginia Mayo replacing Barbara Stanwyck? Sheesh. Yet none of them were as poorly cast as THE OPPOSITE SEX. 1956 was really June Allyson's year for being set up to fail. Not only did she try replacing Claudette Colbert in a poor remake of IT HAPPENED ONE NIGHT, she got stuck in this dud. Comparing Collins to Crawford is like a pussycat next to a tigress.