John Forsthye spills the beans on Joan and Linda.

John in the American Archive interviews spills the beans on working with Joan and Linda. He preferred working with Linda, even though Joan became the focal star and was very instrumental in making DYNASTY such a memorable show. John 'God Rest His Soul' might have had a touch of the green eyes, even though he speaks very highly of Joan but you just know who he is referring to later in the interview, as regards co-star camaraderie.

Oh, I don't think he's jealous of Joan at all. I think he just doesn't like her. Joan is always trying to tell us how envious all her co-stars are, including John and Linda (both of whom had an impeccable reputation for professionalism and being laid-back team players).

No one ever accused gracious Forsythe of being "sexist" or a "misogynist" until Collins did a couple of years ago. It's just a manifestation of her endless bragging.

Joan would reportedly try to get John's goat, to irritate him (there's that People's Choice Award incident) among other things... Joan was told years earlier that "you must pull rank" as a star, advice she took very seriously, so once Alexis happened to her career, Joan became difficult for difficulty's sake, to convey status --- the diva thing, you know.

Spelling wisely hired her, but later made her salary renegotiations much harder than John's and Linda's, because shrewd Aaron liked the way they treated people, but Joan not so much.

Jeroen Krabbe told a funny story about doing the 1991 reunion show, saying that John and Linda came up to him and asked if Collins had said anything about them, the pair apparently concerned that Joan was spinning webs and attributing false quotes to them to create rah-rah... Krabbe never volunteered if they were right.

It should be pointed out that Joan was reputed to be nice and well-behaved for the 30 years prior to DYNASTY, but apparently decided that, as TV's top villainess of all time, since she was going to obviously be typecast forever, she'd just embrace the character off-screen as well. Nearly all the cast, along with Aaron and Esther, have said Joan did that.

Forsythe just wasn't the kind of person to want to have to tolerate that silliness. Even Joan herself has admitted (sporadically) that she and famously non-competitive Linda were friends before the show, and were much cooler once DYNASTY gained traction. But of course Collins attributes that cooling off to Linda's alleged envy and the supposed fear that Joan actually meant Alexis' nasty lines to Krystle in the script whenever Joan delivered them too well. All to make Linda sound small and kind of pathetic.

John's rarely denied that he and Joan didn't really get along. I don't think that's always about jealousy, as much as Collins flatters herself in saying so. 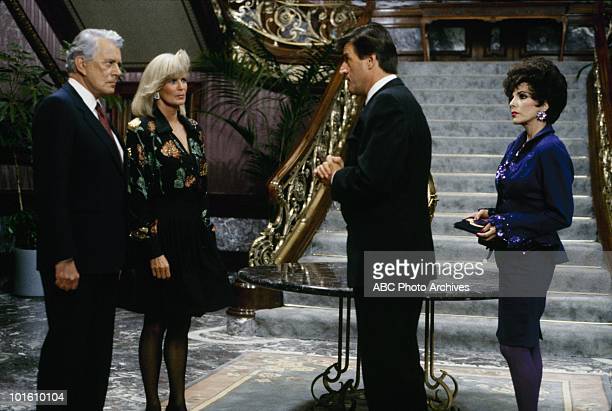 Well Snarky you always post A star material, as regards DYNASTY. However John was jealous of Joan, now why wouldn't he be? He is the leading star in season 1 and then after the court case Joan makes the show her own. Jealousy and not liking someone can quite often go hand in hand. You don't like them or would like to be them because you don't have, what they have. Jealousy is a hatred of mine. I just cannot tolerate the concept, no matter what the reason. I know it's life but a real bugbear, imho.

Jock Og said:
However John was jealous of Joan, now why wouldn't he be?
Click to expand...

So "why wouldn't he be?" is your reasoning.

In terms of how popular she become and Alexis, enough said!

Sorry if it sounds like it like the J word springs to mind. DYNASTY is such a quagmire. I'd better stay over on the Falcon Crest board.

Jock Og said:
Sorry if it sounds like it like the J word springs to mind. DYNASTY is such a quagmire. I'd better stay over on the Falcon Crest board.
Click to expand...

You can post where e'er you choose, Jock Og. People won't always agree on stuff.

John also said there was tension between him and Joan and it was good for the show. This tension did not have to be generated artificially ...

Would love to know what he first said when Joan didn´t appear for shooting when S6 started .... had he hope this will be her exit?