I saw Tobe Hooper's version of Stephen King's SALEM'S LOT (1979) again recently, a startlingly good TV movie if you see the entire unedited film and not the slashed-up version they released to theatres a bit later. And it got me thinking about.... The 1975 pilot, well-directed by Barry Shear, was a violent, intense, street-y introduction (with a different Captain Dobey) and you could almost believe it.

Season 1 of S&H started out as kind of a super-hero, super-cop show, sometimes brain-dead but an example of style-over-substance, with Paul Michael Glaser watchable and prowling and David Soul as the nerdier blond guy who seems to emulate his more charismatic co-star (even taking to putting up his jacket collar on leather coats which are much too big to be doing this with without looking ridiculous).

The two stars are actually pretty good actors, although they often mug it up defensively in response to the sometimes-anemic material (which, to be honest, sometimes makes it worse). And then there's Huggy Bear, Bernie Hamilton's cuddly-explosive Dobey, and that red Torino with the white stripe which, in real life, was a lemon and not the muscle car the show pretends.

And this kind of platonic male touching raised eyebrows in the '70s, not as progressive an era as the revisionism would have us believe. The only reason the "prime time homos" slur didn't really stick was that the duo were viewed as too butch for that to possibly be true. (Again, it was "a gullible time" as Glaser himself later observed).

But Season 1 works in its cartoonish way. They're almost wearing capes.

The show even hit #1 for the week once towards the end of its first year.

Season 2 is a bit less violent (no more episodes with 5 shoot-outs in an hour) but does nothing to assuage the critics and media watchdog groups that decide this is the most irresponsibly violent show on television.
There's still a lot of running and chasing, but less killing and less gunfire. Glaser and Soul also reveal themselves to be pretty skilled directors... Mostly, it's still entertaining enough, although, by the end of Season 2, the show has become so campy and satirical of something which was already a de facto satire that it's virtually unrecognizable from the entity which emerged two years earlier.

Season 3 and 4 toss us one awful episode and one goodish episode after another, junk interspersed with decent potential, with no rhyme or reason.

In keeping with its schizoid identity, STARSKY & HUTCH has an entirely different theme song nearly every season: Season 1 had a dark and ominous theme composed by Lalo Schifrin (of MISSION: IMPOSSIBLE fame); Season 2 had a bouncy, jazzy theme by Tom Scott (re-orchestrated for S4) and the most famous of the themes, and the one reused for the OwenWilson-BenStiller movie parody years later; and, for Season 3, a typical atonal theme from Mark Snow (of subsequent X-FILES fame) which is easily the worst of all, matched by new, overtly-comedic shots for the title design which are dreadful and tell the viewers: yes, we really are a joke show after all... And this after the producers asked the stars to not do their scenes in such a "jokey" manner!

Worse still, for a program which depends solely on tone and its leads' "charm," it is Mark Snow's deadening scores, used even in Season 4 long after his theme has been abandoned, which kill the series' pacing even more than was already occurring with the scripts following the 1977 industry-wide pull-back on TV violence which slowed-down the last two seasons. (Hutch's burgeoning weight and bowler's smock for Season 4 didn't help much, either).

Yes, yes, I know it's hard to talk about "potential" with a straight-face when referencing an Aaron Spelling shlockfest like STARSKY & HUTCH, but there is really something to the recommendation that in series TV production, "first make it a hit, then make it good." (I think David Jacobs said that, although I don't know if he was quoting someone else). Unfortunately, with Spelling, the pattern was usually: first make it a hit, then abandon it and let is quickly spiral into dreck by its third year, star appeal keeping it going before the project eventually has to be executed in a dreary cellar like David Soul does Mr Barlow at the end of SALEM'S LOT.

My point being that the campy, cartoonish stuff from the first two seasons almost succeeded, given what the series was at the time. But by the third year, those kinds of episodes became unwatchable because the series didn't organically want to be stuck in that shlocky mire anymore -- but the producers didn't appear to be paying attention to that objective instinct. So when S&H did do the odd, good, serious episode during S3 and S4, it's frustrating because it reminds you of what the show was capable of but mostly wasn't exercising. 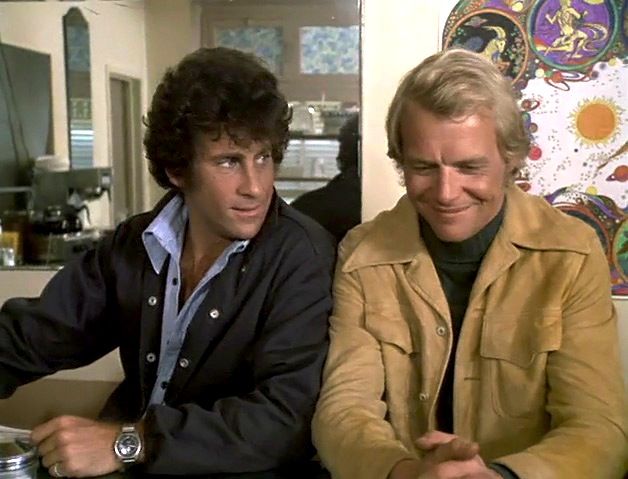 Starsky and Hutch was my pre cursor to Dallas
A show I loved and started to collect everything about it and its stars from newspapers and magazines
I bought the monthly magazine with my pocket money, i joined the Starsky and Hutch Appreciation Society / fan club
I think it cost me a £1.00 (and dont tell your father you have wasted all that money )

i did buy the box set, some stories are great and gritty, others cheesy but nice to see Ken K, Mary C and Steve K in storylines pre Dallas. I was disappointed when it was cancelled but along came a show called man from Atlantis in UK and Pat D stole my heart!!
the rest is history ..............................

Snarky Oracle said:
"first make it a hit, then make it good." (I think David Jacobs said that
Click to expand...

Was he thinking of Dallas and Knots Landing?

Favourite Movie
Planet of The Apes

That video is on the DVDs I believe?
JB

Willie Oleson said:
Was he thinking of Dallas and Knots Landing?
Click to expand...


johnnybear said:
That video is on the DVDs I believe?
JB
Click to expand...