I'm really looking forward to this one, as I loved the novel.

In a dystopian near-future, thetotalitarian and Christian-fundamentalist government of Gilead rules the former United States amidst an ongoing civil war and subjugates women, who are not allowed to work, control money, or even read. Widespread infertility due to environmental contamination has resulted in the conscription of young fertile women—called Handmaids, according to biblical precedent—who are assigned to the homes of the elite, where they must have ritualized sex with the men in order to become pregnant and bear children for those men and their wives.

The main character, Offred, is the Handmaid assigned to an elite Commander and his wife, and as such is subject to the strictest rules and constant scrutiny; an improper word or deed on her part can lead to her execution. Offred, so named because her master is named Fred, can remember the "time before", when she was married with a daughter and had her own name, but all she can safely do now is follow the rules of Gilead in hope that she can someday live free.

Isn't there a film of this with Jolie Richardson?

Alexis said:
Isn't there a film of this with Jolie Richardson?
Click to expand...

And Faye Dunaway as the commander's wife!

Willie Oleson said:
And Faye Dunaway as the commander's wife!
Click to expand...

I don't think I've seen it but I must have read about it somewhere recently.

At first I thought it was going to be a remake of Red Riding Hood.

I´m refloating this old thread because I´ve just watched the 1990 version of "The Handmaid´s Tale"...and I liked it! To be honest, I had the feeling that, despite the remarkable cast, it would be a flop...but it´s not though it has a 6 rating on IMDb.

See below the trailer, with Faye Dunaway in the role played by Yvonne Strahovski (Serena), the late Natasha Richardson as the rebellious Offred/June (Elisabeth Moss), Robert Duvall in Joseph Fiennes´s role, and Elizabeth McGovern in Samira Wiley´s (Moira).

The story is limited to scarcely two hours, and only the last two minutes seem to be an unnecessary add-on for commercial reasons, though I think it didn´t need it. The theme is tough and beyond its time, and it´s understandable and watchable with the 10s´ sensibility, but not so much with the early 90s´!! The most outstanding virtue is that one can say that you are watching the same story with little changes, even in the same places (but it´s not!).

No hats in the movie!​
All the characters are described almost as well as in the show, though they are oversimplified: June is more naïve, Serena (a very restrained Dunaway with Joan Crawford´s big shoulderpads) is a former opera singer instead of a clever woman retired by her marriage, Moira is just like the one from the show (and white too, just like June´s husband and Serena´s maids...) and McGovern is really great in a type of role far away from her Lady of "Downton Abbey"...

Aidan Quinn is correct (and cute) as the chauffeur Nick and Victoria Tennant as hateful as Ann Dowd´s take on the role, but both characters have been reduced to the minimum expression to make the plot believable. Funny that the Janine role is perfectly drawn with three scenes and a fine actress, Traci Lind. About the plot itself, it sort of follows the story of the show´s first season. 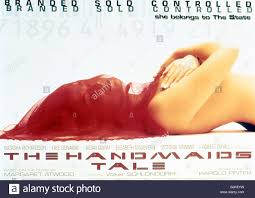 Believe it or not, this was one of the movie´s posters...​
One big problem is the Commander, played by Robert Duvall. In this case there is no comparison between him and his TV counterpart: Duvall is too kind and even paternal when Fiennes seems to be going to strangle someone in every scene...In fact he reminded me more of Bradley Whitford´s character in Season 3, I wonder if the screenplay writer used both characters to define this one.

The movie is equally depressing, dystopic and highly recommendable to watch as a social commentary of what we are living now, or maybe next year...I found funny the fact that nobody wanted to make this movie for four long years, and all the actresses except two declined the role (Jodie Foster and Sigourney Weaver, who got pregnant and left to be replaced by Richardson).

Producers said that "that kind of story was about women and only would interest women..." Probably Harvey Weinstein would agree with that. So it´s actually worthwhile watching it, despite its faults. I had to lol when I read that Dunaway wanted to quit because her character was "too weak" (I´m sure she would have loved to do the current show´s version of Serena!!!).

Season 4 is now over and I feel they did their best to sustain the story for another 7 episodes but it's on life support. By some way the weakest season so far but a second rate season of The Handmaid's Tale is so much better than many other shows on TV. I can't put out any spoilers but I like that they finally allowed the story to move on.

Elisabeth Moss has to be one of the best actresses currently on TV (and film) she was brilliant again this season. It was a shame that Aunt Lydia was in it a lot less than in previous years.

I'm not quite sure what to make of the latest season (season 5) of The Handmaid's Tale. It's a bit like seeing a sick old friend: on the one hand you're glad to see them and that they still have some life in them but on the other hand it's sad to see them as a shadow of their former selves clinging on to life. It's still very watchable and entertaining but it's no longer the compelling watch that it used to be in the first few seasons.

Angela Channing said:
I'm not quite sure what to make of the latest season (season 5) of The Handmaid's Tale. It's a bit like seeing a sick old friend: on the one hand you're glad to see them and that they still have some life in them but on the other hand it's sad to see them as a shadow of their former selves clinging on to life. It's still very watchable and entertaining but it's no longer the compelling watch that it used to be in the first few seasons.
Click to expand...

I wouldn't put it quite as harshly as that but I see where you're coming from. It does seem to have been dragged out longer than necessary. Without giving anything away, the final scene hinted at something I would have liked to have seen much earlier.

I thought this season was a big improvement on last season. I rewatched the entire show recently and only really began to lose momentum when I got to season 4 and
June's escape from Gilead and arrival in Canada
which I felt dragged a bit. I enjoyed this season more and I'm interested to see where the final season goes.

As for the film, I read somewhere there was a voiceover recorded to narrate the story as the book is but they never ended up using it and the movie lost a lot of voice and perspective. I thought as far as the comparison to the show goes the film isn't nearly as terrifying, but I'm also only comparing it in hindsight so perhaps back when it was originally released it was more impactful. The story is genuinely troubling.
Share:
Facebook Twitter Reddit Pinterest Tumblr WhatsApp Email Share Link
Top