"Heck, your boyfriend got your insanely hot husband killed a year ago..."

I'm not sure about Michelle Stafford, but I think Cynthia Watros may have shared a scene or two with Nina's dead husband, Michael Easton.

Daniel Avery said:
"Heck, your boyfriend got your insanely hot husband killed a year ago..."
Click to expand...

I was thinking as I watched the other day about how Peter removed and threw away Nathan's bulletproof vest. Did he tamper with it so it would be less effective? It's like how the show has messed with Maxie's brain.

I can't shake the idea that something is still going on with Kirsten Storms off-screen, and it impacts how Maxie is being used on the show. She's always in drab, black clothing and overly made-up. I'm not seeing any of her 'spark' with the other actors. I could understand being kind of stand-offish with NuNina, but her stuff with longtime scene partners like Lulu, Dr. Obrecht, and Michael seem so flat, sort of like she's phoning it in. They're not using her as much; I'm not sure if they're de-emphasizing her because of this, or if they just don't know what to do with Maxie as they (once again) transition out of one co-Head Writer and into another.

Maxie is a total b*tch lately. I can't help but think she is far removed from Nathan's wife, even going so far as to blame Lulu for Nina's unhappiness. With Nina having been such a b*tch to Willow, I thoroughly enjoyed seeing her wedding destroyed. But overall I can't help but feel that there are too many characters on canvas, and that most of the current stories are in desperate need of something. Not Shiloh, though. I wish he would take Nina and Valentin to Cassadine Island permanently.

What happened with Cassandra Pierce? She was fighting extradition and then she just vanished into a plot hole? Perhaps she is Sam's cellmate at Pentonville.

I have no way of knowing, but I'm guessing her storyline is directly tied to Nikolas's [possible] return, and whether they can nail down details with Tyler Christopher--or another actor, if they decide to recast. The dialogue said that she successfully fought extradition by the WSB, who wanted to send her to a Supermax prison, and is currently being held in a local facility (likely Pentonville). They might also be holding off on that plot while Finola Hughes continues to be off-screen, since the give-and-take between those two would be the best story for FH upon her return. This extended "summer break" of hers is enough to make Tony Geary blush.

Tamara Braun is officially on my hit list. If I never see another scene of her crying over Franco/Drew, it will be too soon. She is more upset over him than she was when Oscar died! If only she could be smothered with a pillow like her character on DAYS was.

I thought it was kind of funny when FrankenDrew got that "bitch crazy!" look on his face shortly after the trial, when Kim was going on and on about how they'd leave town and start over like nothing happened. Part of it is (hopefully) Franco's memories/attitudes coming back through, since he was not reaching out to her or wanting to touch her. He's gone through this "memory swapping" and being told he's someone else--and yet he thinks SHE has more issues than he does!

But who was that playing him?
https://www.tvshowsace.com/2019/10/31/general-hospital-secretly-recasts-nikolas-cassadine/

The new Nicholas looks a bit too young for the part--kind of a "replace Nathan Fillion with Tom Degnan" sort of deal.

I read he's 41, while Tyler Christopher is 46. But TC hasn't been taking good care of himself (to be kind) for some time and that will take its toll sooner or later.

Joey B's Nathan Fillion vs. Tom Degnan indeed took some getting used to, but that's nothing compared to the recast of Nicole Drake on The Edge of Night, where Maeve McGuire (born 1937)…. 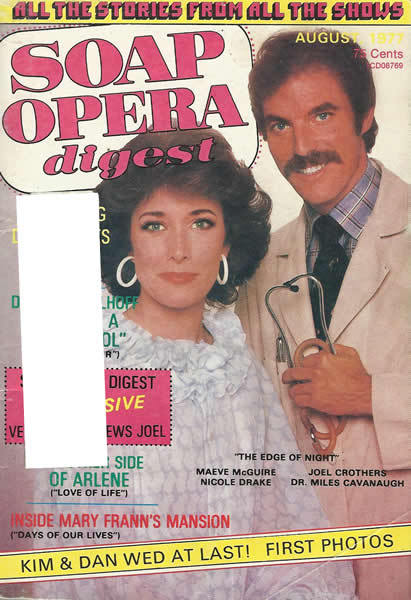 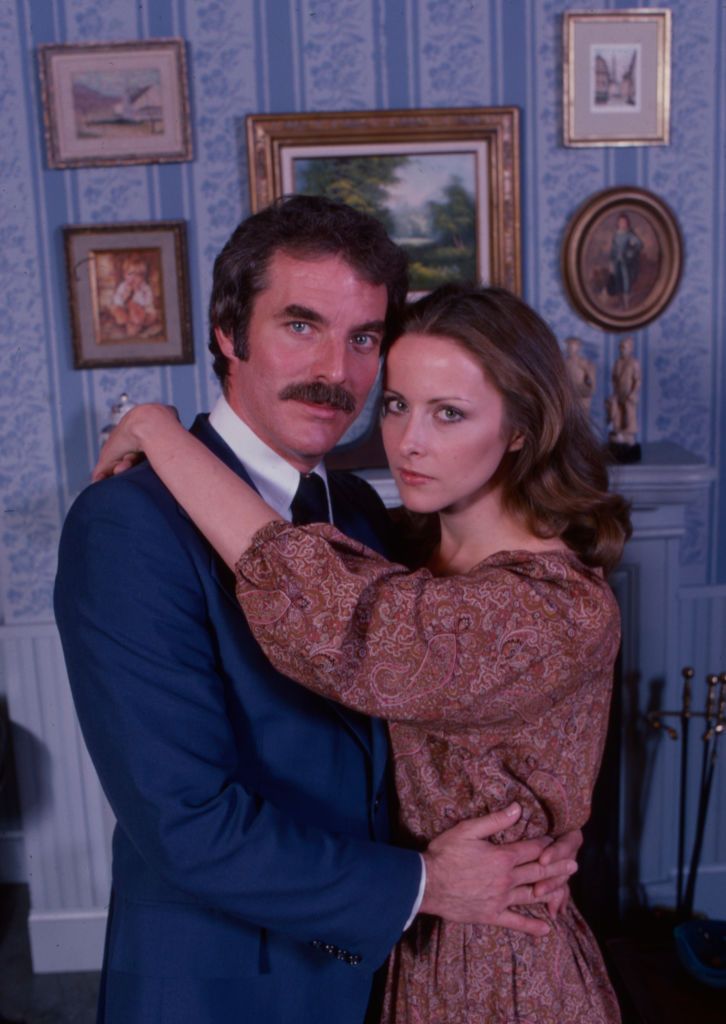 (note: they didn't de-age Joel Crothers as her husband, Miles)

I guess if soap fans can accept post-menopausal women giving birth, and every single character having a double/evil twin, we can probably handle a drastic age drop in the actor's age. Thanks to SORAS, age is a fluid concept anyway. Though I don't understand why Jason had to rescue Anna and Charlotte from Cassandra. Shouldn't he be trying to look for a plastic surgeon to alter Sleepy Sam's face when he breaks her out of prison? Or is he going to dress in drag, and get thrown in Pentonville so he can protect her?

Nikolas helped Cassandra escape. And yet as she was fleeing, she called Valentin to thank him for leaving a boat in which she could escape?

She called because she wanted to be the bearer of bad news (well, bad news for HIM, anyway): she wanted to tell him who had broken her out of custody the first time (Nikolas), thereby telling him that Nik's alive and still hates him even more than Cassandra does. But Valentin basically hung up on her before she had a chance to share the news. You could say he blew it.

Is GH a comedy now? Sam is a "productive member of society"? Jason is going to "take care of her children"? Every time they show Jason with a child (usually his), he looks like he's trying to pass a kidney stone. Nikolas is showing himself to Charlotte?

There have been so many preemptions lately that I am almost certain I missed an episode, or ABC skipped it, because I did not see Anna meet Violet.

The impeachment inquiry was so deadly boring that CBS decided to go back to airing Y&R/B&B in fear of their Sweeps ratings going into the tank. Too bad ABC didn't have similar reservations about GH. I would not be surprised if you did miss an episode if not major parts of one, since I have heard instances of where ABC interrupted an episode as it was airing to bring some "hot news" item. A witness probably sneezed.

From what I read, Anna returned to her home to find Hayden and Finn sitting on her couch (not kissing or anything), but as soon as they had completed some boring small talk, Violet came downstairs and asked Anna if she was "a friend of her daddy's." No idea where it went from there, but I don't think any furniture got turned over or glass broken--that's not their style.


Ray&Donna said:
Jason is going to "take care of her children"?
Click to expand...

Danny already thinks Monica is his mother, and Kim could have grabbed Scout on her way out of town and no one would've noticed.

Right, when Jason told Danny that Sam was imprisoned until she could be granted work release (again), he tearfully admitted that he didn't know who his father was talking about. He does remember Billy Miller, though, but Scout only remembers Atticus Finch

Scout is the only infant I've ever heard about who knows how to change her own diapers.

In other news: Jane Elliot/Tracy is going to make what I assume is a short return in December. It's probably something to do with Brook Lynn's (more permanent) return to PC. I luvs me some Tracy/Monica bickering. If Monica gets to work in my all-time favorite dig, that the mansion is hers, that Alan gave it to HER, then it will be a Merry Christmas, indeed.

I look forward to Tracy's return, no matter how brief. Most of the episodes lately have been difficult to follow/sit through. The stories, especially Brad and Lucas, are about as interesting as Jason's shirt collection.