"Beat me on the bottom with a Woman's Weekly": All things Victoria Wood

Speaking of Vic on the radio, I've just been listening to her first JAM appearance. She did really well, especially considering she was up against three seasoned regulars - Kenneth Williams; Derek Nimmo and Peter Jones: 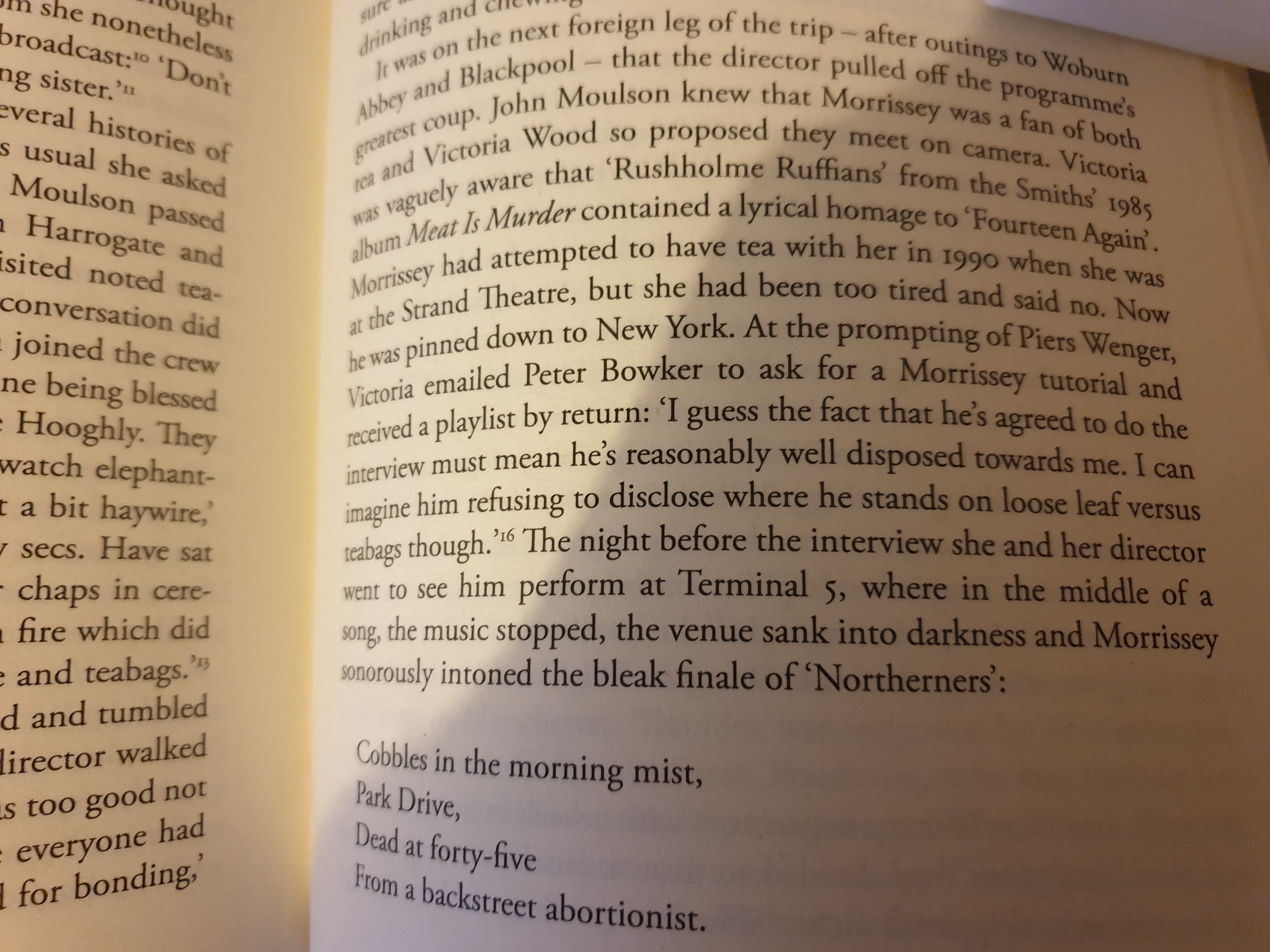 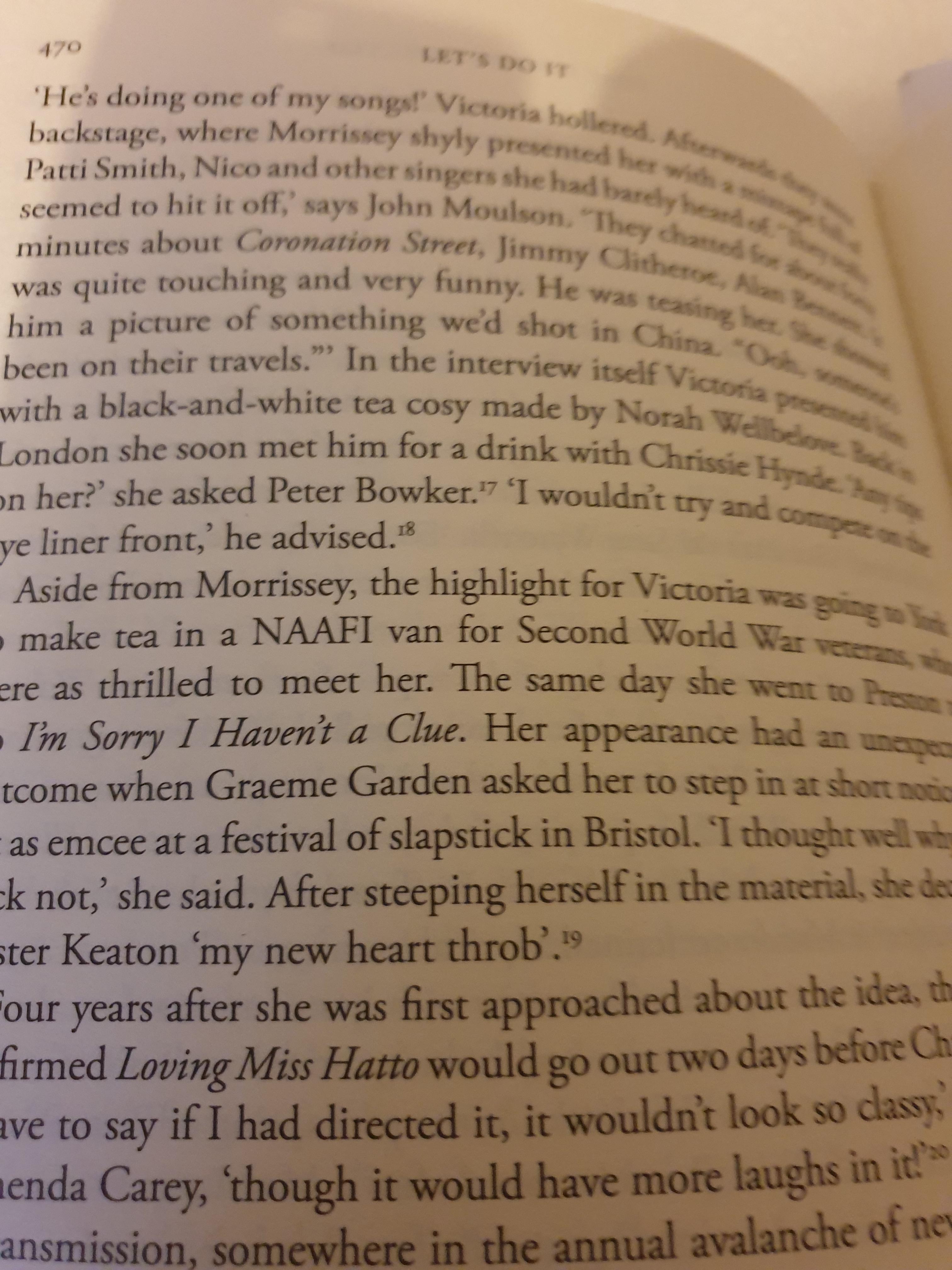 PS I like the quote re Chrissie Hynde, I wouldnt try and compete on the eyeliner front!!

Barbara Fan said:
Getting to the final chapters now - In Oct 2012 she was diagnosed with a cyst which proved to be cancerous and she underwent radiotherapy

By 2013 she is back working and Morissey of The Smiths was a fan and she met him
Click to expand...

These are great, BF. Thanks.

I'd read about the Morrissey connection after watching Talent because of the Fourteen Again connection. The two of them chatting about tea. Could it be any more British?!

Barbara Fan said:
I dont think I have ever seen Loving Miss Hatto - have you @Mel O'Drama
Click to expand...

No. I hadn't even heard of it. I need to add it to my watchlist.

I finished the book

sadly she was diagnosed with Oesophageal cancer in late 2015 and underwent treatment at Harley St clinics, chemo, 2 stents inserted, lost weight and came home to die in her own home in Highgate with caers and McMIllan. I get the feeling she didnt want to acccept that her life might be nearing an end and her former husband Geoff Durham was a great supprt to her and their children

She told very few people of her illness and I think I so admire her for that - Im never sure why people want to broadcast it form the rooftops and its sums up Victoria who off screen could be shy and awkward in company, so different from her onscreen persona

RIP Miss Wood, thanks for the laughs and tears and thank goodness for DVD!

Barbara Fan said:
She told very few people of her illness and I think I so admire her for that -
Click to expand...

Yes. I feel the same. I greatly admire celebrities who are protective of their families and manage to prevent their personal lives from becoming part of their brand.


Barbara Fan said:
RIP Miss Wood, thanks for the laughs and tears and thank goodness for DVD!
Click to expand...

Amen to that, BF, and thanks for sharing some titbits from the book as you've read.

And I have to say to you @Mel O'Drama thanks for great, insightful and thought provoking insights into her shows and for all the hours you have put in watching and writing it all up for the likes of me to enjoy.

Its been a pleasure and a joy!!

Barbara Fan said:
And I have to say to you @Mel O'Drama thanks for great, insightful and thought provoking insights into her shows and for all the hours you have put in watching and writing it all up for the likes of me to enjoy.

Its been a pleasure and a joy!!
Click to expand...

Thanks BF. That's really kind and it's been my pleasure.

I've really enjoyed watching lots of Vic's work in order and seeing how the pieces all fit together. It's given me a lot of laughter therapy in the last six weeks, and we all need a bit of that sometimes.

Barbara Fan said:
And I have to say to you @Mel O'Drama thanks for great, insightful and thought provoking insights into her shows and for all the hours you have put in watching and writing it all up for the likes of me to enjoy.

Its been a pleasure and a joy!!

Yes thank you Mel. You’ve made me remember so many classic moments.

Alexis Colby Carrington said:
Yes thank you Mel. You’ve made me remember so many classic moments.
Click to expand...

James from London said:
Don't know if such a thing even exists after your exhaustive Woodathon, @Mel O'Drama but this promises "never-heard-before material" at 6.30 this evening: 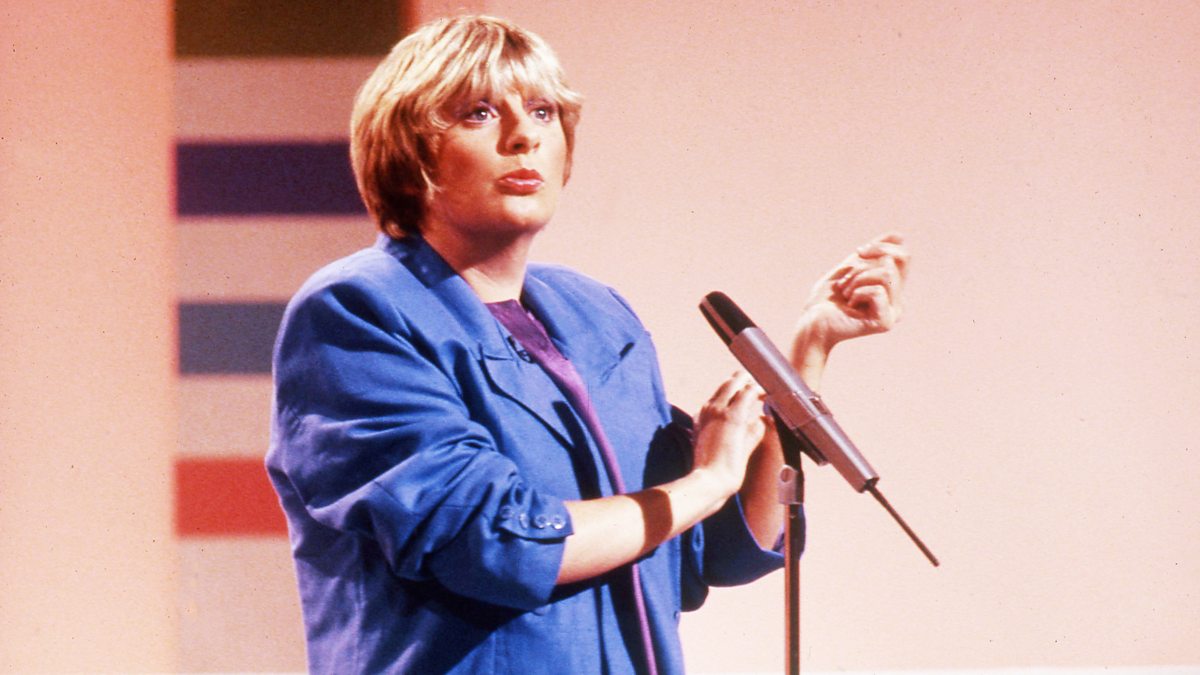 A look back at Victoria Wood's stand-up and songs with her own archives and tapes.

Mel O'Drama said:
It was a really fun listen and there were a few things I hadn't heard before (the tour guide was great). I really liked the tone of the show, which didn't take itself too seriously. And best of all, they got stuck into the semantics and rhythms. It certainly made the ironing feel less chore-ish, and I'm looking forward to part two next week.
Click to expand...

I've just caught up with the second part on BBC Sounds. It's been just fascinating to hear Vic's recordings of running through her show or her audio diaries and reinforces the work that's gone into making every tiny moment absolute perfection.

There seems to be real interest in Vic and her work at the moment. I really hope some more hidden treasures will come from it.

I wish they would repeat Eric and Ernie !!

Julie Walters, Lenny Henry, Richard E Grant and Jim Broadbent gather for a gala honouring the much-loved entertainer, with contributions from Peter Kay and French and Saunders. The celebration offers an opportunity to look back over her career with a combination of celebrity tributes and clips of her work, culminating with the presentation of the Bafta award

Victoria Wood: At It Again​

The much-loved comedian performs her award-winning stand-up show in front of an audience at London's Royal Albert Hall. Recorded during her At It Again tour in 2001, the gig features Victoria's ruminations on everything from Disneyland visitors to her hysterectomy

Bren's mother wreaks havoc in the factory and incurs Stan's wrath by pursuing an ill-considered romance, while Anita organises a heated debate on the workers' current situation. Comedy, with Victoria Wood and Julie Walters

I forgot to post this little gem re Crossroads 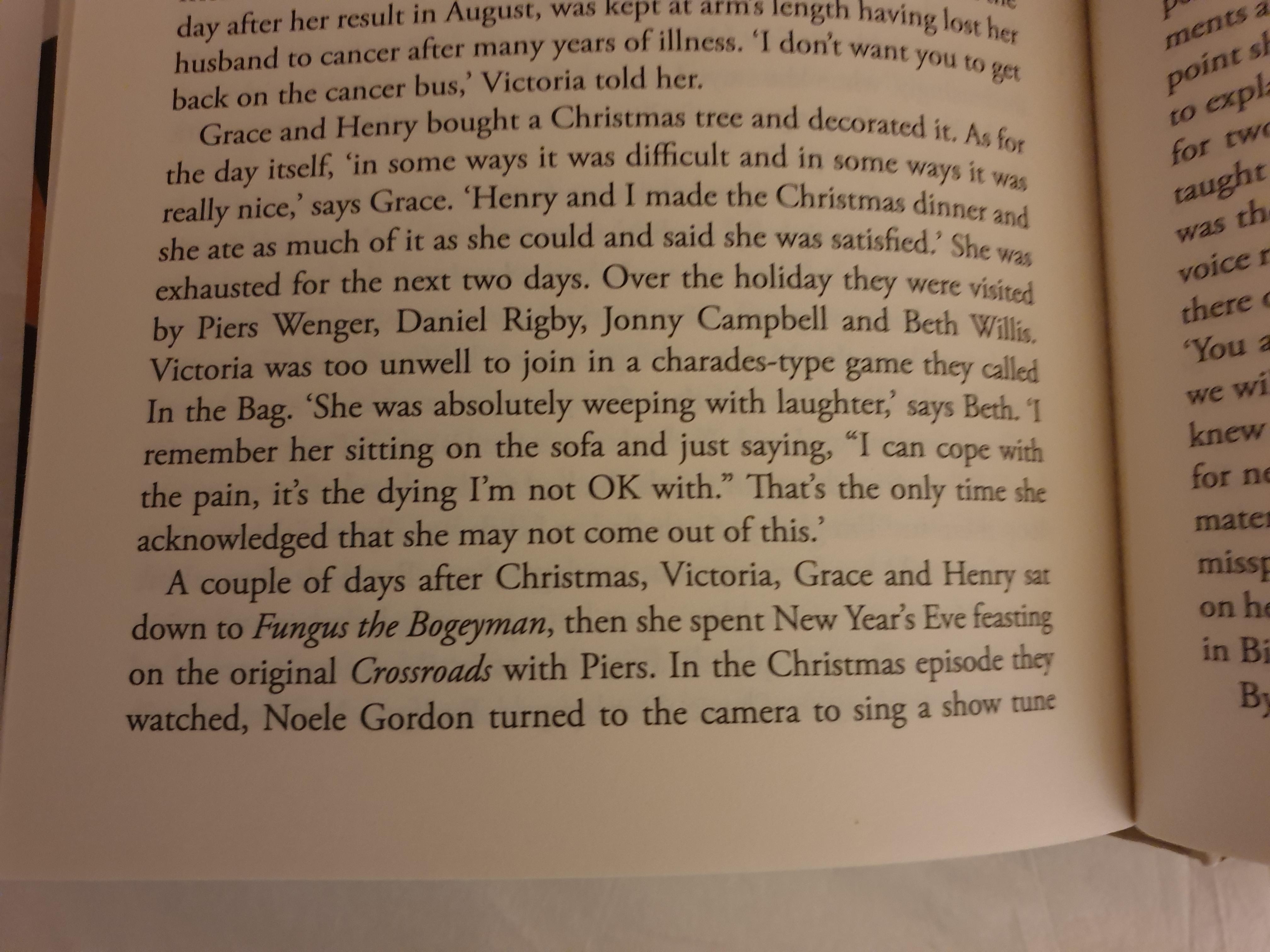 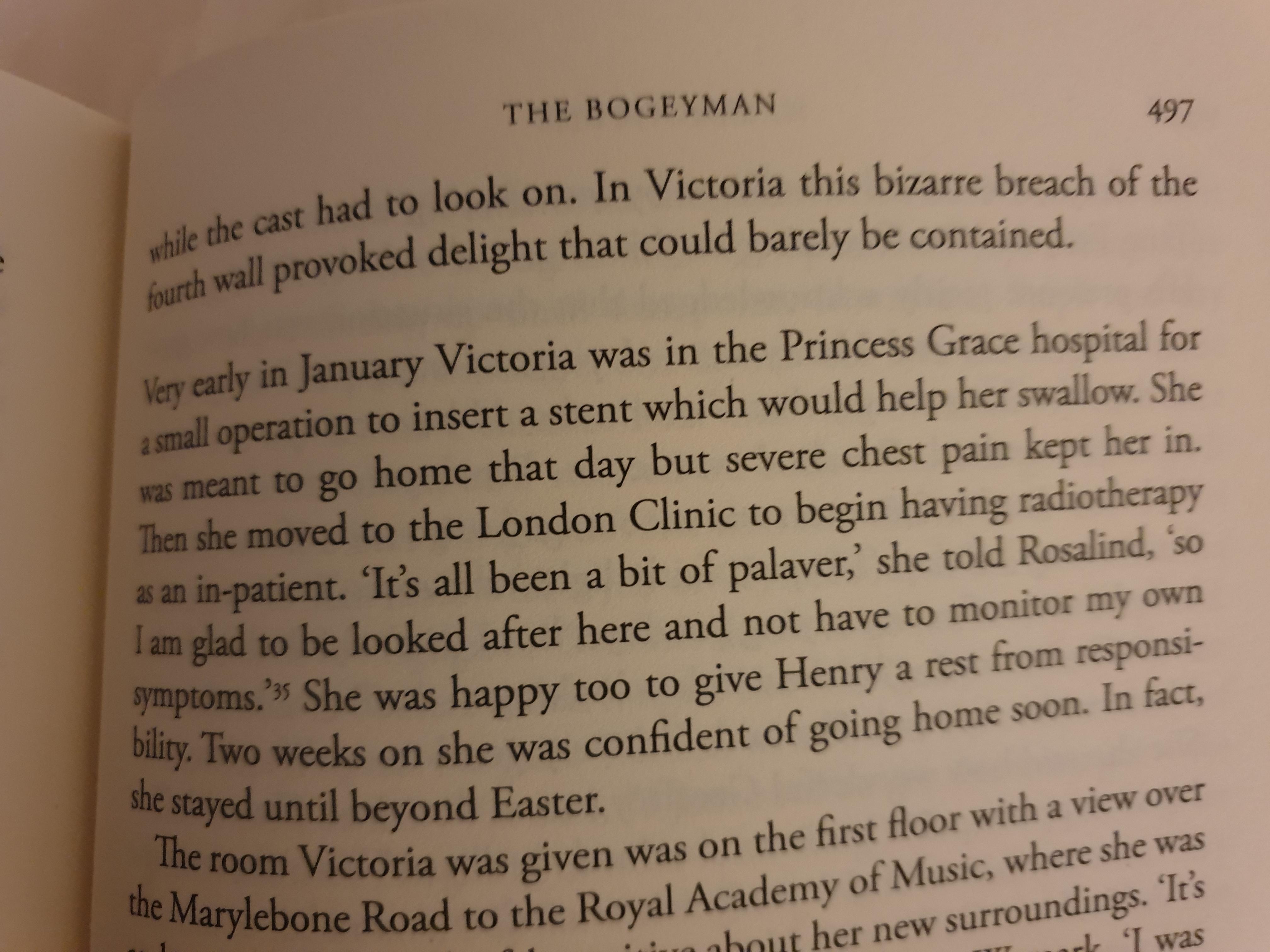 Its so Victoria Wood!!!

Oh, brilliant!! If only every Saturday night was Victoria Wood Night.


While I've watched At It Again and dinnerladies again in the last couple of weeks, I didn't watch the BAFTA Tribute in full, so I'll definitely catch up with that one on iPlayer in the coming days.

That scene always reminds me of you and @Angela Channing. Christmas wouldn't be Christmas without it round these parts.

I watched the Bafta Tribute tonight

The Acorn antiques tap dance / musical at the end didnt do it for me!

I did the same and thought it was lovely. It was a nice surprise that it ran for over an hour as I'd convinced myself it was half an hour.

Great to see Jim Broadbent, Lenny Henry and plenty of other friends she'd known for decades hosting it. The Continuity Announcer's introduction was terrific as well.

I enjoyed the chat from the stage, and am glad of that rather than more clips. After The Secret List, Victoria Wood In Her Own Words and From Soup To Nuts I've seen and heard oodles of clips, so I liked this approach for a change. It was interesting to hear how she'd inspired others and to get their perspective.

Vic looked overwhelmed by it all, which isn't surprising considering all those incredible people coming together to admire her talent.

Tip Tap Top was in my head for days after watching Acorn Antiques: The Musical and now it's back in there again. Such an earworm. Vic knows how to write them. I thought it interesting that Joan Armatrading and other musicians spoke of Vic's talent at writing songs.

Oh wow. This is great. Short but sweet.